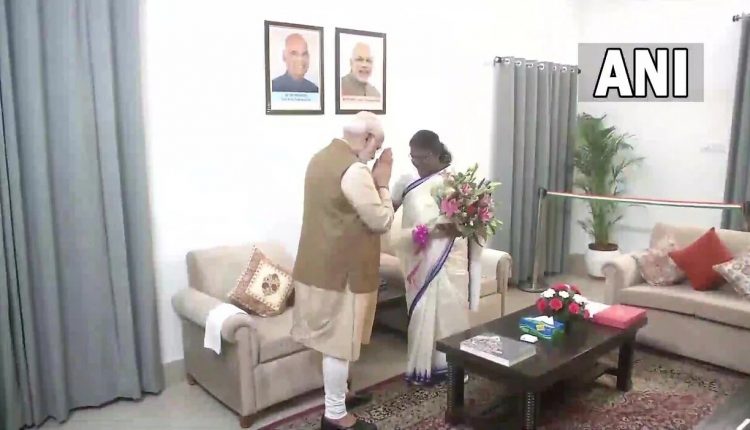 New Delhi: Congratulatory messages have been pouring in for Droupadi Murmu on winning the presidential election. Among the fi. rst to do so was Prime Minister Narendra Modi. “India scripts history,” PM Modi tweeted after the National Democratic Alliance candidate, the first tribal President of India, defeated the joint opposition candidate Yashwant Sinha.

“At a time when 1.3 billion Indians are marking Azadi Ka Amrit Mahotsav, a daughter of India hailing from a tribal community born in a remote part of eastern India has been elected our President. Congratulations to Droupadi Murmu ji on this feat,” PM Modi tweeted.

India scripts history. At a time when 1.3 billion Indians are marking Azadi Ka Amrit Mahotsav, a daughter of India hailing from a tribal community born in a remote part of eastern India has been elected our President!

Congratulations to Smt. Droupadi Murmu Ji on this feat.

“Droupadi Murmu ji’s life, her early struggles, her rich service and her exemplary success motivates each and every Indian. She has emerged as a ray of hope for our citizens, especially the poor, marginalised and the downtrodden,” PM Modi said.

“Droupadi Murmu ji has been an outstanding MLA and Minister. She had an excellent tenure as Jharkhand Governor. I am certain she will be an outstanding President who will lead from the front and strengthen India’s development journey,” PM Modi said.

“I would like to thank all those MPs and MLAs across party lines who have supported the candidature of Smt. Droupadi Murmu Ji. Her record victory augurs well for our democracy,” the Prime Minister said.

Heartiest congratulations and best wishes to Smt. Droupadi Murmu on being elected as the 15th President of India, said a Rashtrapati Bhavan tweet.

Heartiest congratulations and best wishes to Smt. Droupadi Murmu on being elected as the 15th President of India.

Yashwant Sinha, who ran for President as the opposition’s joint candidate, also congratulated President-elect Murmu after the results came out this evening.

“I join my fellow citizens in congratulating Droupadi Murmu on her victory in the presidential election 2022. India hopes that as the 15th President of the Republic, she functions as the custodian of the Constitution without fear or favour,”  Sinha tweeted.

In a one-page statement conceding defeat, Singh said, “Despite the outcome of the election, I believe it has benefitted Indian democracy in two important ways. First, it brought most opposition parties on a common platform. This is indeed the need of the hour, and I earnestly appeal to them to continue – indeed, further strengthen – opposition unity beyond the presidential election. It must be equally evident in the election of the Vice President.”

“Second, in the court of my election campaign, I tried to highlight the views, concerns and commitments of the opposition parties on major issues before the nation and the common people. In particular, I voiced strong concern over the blatant and rampant weaponization of the ED, CBI, Income Tax Department and even the office of the Governor against opposition parties and their leaders,” Sinha said.

Congratulate the daughter of #Odisha, Smt #DroupadiMurmu on being elected as 15th President of India. It is indeed a very proud moment for everyone in Odisha that she has been elected for the highest office in the country. pic.twitter.com/eG27IvsnfI

I join million of Odias in conveying heartiest congratulations to Smt. #DroupadiMurmu for being the first Odia to become the President of India. Pray to Lord Jagannath to bless you with a great Presidential tenure.🙏 pic.twitter.com/RNI4D30Sou

Know What Droupadi Murmu Said On Her Election As President