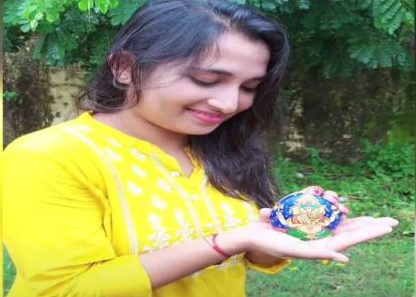 Rourkela: In the movie ‘3 Idiots’, Farhan Qureshi (played by R Madhavan) was passionate about wildlife photography, but forced to pursue an engineering course. So is the real life case with Rourkela resident Bhagyashree Sahu.

Bhagyashree is an artist by heart, but chose to take up a traditional career path. “I was never passionate about engineering, but everybody around me was getting into it and so I followed in their footsteps,” the 27-year-old MTech student confessed.

And like her reel counterpart Farhan, her family’s traditional mindset has also been a stumbling block. “In my house, no one knew painting could be a career option. It was not something that was understood,” she added.

Then something unexpected happened that proved a game changer. Prime Minister Narendra Modi mentioned Bhagyashree in his monthly radio address, ‘Mann ki Baat’. The PM praised her skills in Pattachitra and for popularising the traditional Odia art form in present times.

Modi mentioned, “Although Bhagyashree is a student of engineering, in the past few months, she started learning the art of Pattachitra and has mastered it… A few days ago, on the birth anniversary of Subhash Babu, Bhagyashree paid him a unique tribute done on stone.”

Bhagyashree admitted that she still can’t get over her excitement that the PM personally mentioned her name. “Getting recognised by PM Modi Ji has given me a push to move forward. I have been recognised because this craft stands out,” she said.

Also, the recognition has been an eye opener for her parents. They now want their daughter to pursue art as a profession. “My family is encouraging me to start my own studio where I can conduct workshops and teach people,” she added.

Recalling her tryst with Pattachitra, Bhagyashree shared, “I had an idea about Pattachitra but never tried it out or thought I could design. Patachitra designs are incredibly intricate and time-consuming.”

She often picked up stones on her way to college and used them as canvases for drawing sceneries and portraits of Lord Jagannath. “Whenever I had free time after my classes, I would pick a stone and start painting on it,” she said.

However, the lockdown proved a damper and she had to return home to Rourkela. “As stones were not as easily available here, I started looking for alternatives. Even getting a chart paper during the lockdown was not easy. So I painted on easily available items at home such as bottles, fabric, plywood and plastic and tried to be as innovative as possible when it came to picking a medium to work with,” said Bhagyashree, who is pursuing an MTech degree at IGIT Sarang in Dhenkanal.

She will be passing out in May this year, The Indian Express reported.

Covishield Vaccination For 18+ Group In Rourkela From This…