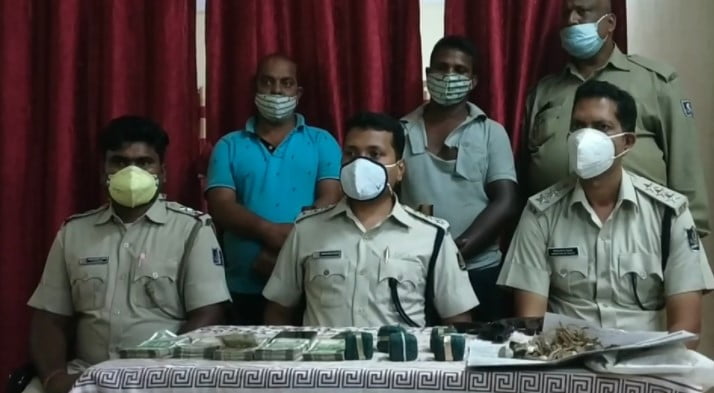 Keonjhar: Police bust an inter-state extortion gang and arrested its two members in the district on Sunday.

According to police sources, the extortion gang members had allegedly demanded a ransom of Rs 2.5 lakh from the owner of a hardware store on Barbil main road in the own. As store owner Dinesh Atal did not pay heed to their demand, the criminals hurled bombs at his shop on September 21 and again made the ransom demand.

The bombing led Dinesh to file a complaint with Keonjhar police. Registering a case, the police started investigation. Even before the police could make any headway in the investigation, the gang called up Dinesh and demanded the ransom. On the information about the call, police set a plan.

As per the plan, when the gang called up Dinesh again, he agreed to pay the ransom. His brother Ramesh Atal went to pay the amount. While two members of the gang were taking the money from Ramesh, police nabbed them.

The two miscreants were identified as MD Husain and Parbej Akhtar of Jharkhand. Police arrested them and seized two guns, five hand-made bombs, a bike and a live cartridge from their possession.

Another member of the gang, Basudev Mohanta, is absconding and a manhunt has been launched to trace him, said Barbil SDPO Himanshu Bhusan Behera. All the three accused are wanted in several criminal cases in Jharkhand,  Bihar and West Bengal, he added.

Cyclone Jawad To Hit Odisha Coast Near Puri On Dec 4…

Ganjam Or Puri? Check The Weather Models About Possible…