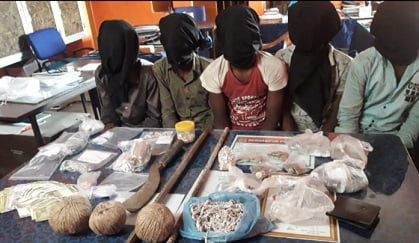 Berhampur: Police foiled a loot attempt and arrested five persons in this connection on the outskirts of the city late Wednesday night.

According to sources, while the personnel of Golanthara police station were on night patrolling duty, they spotted the five persons attempting to loot in Kanisi Haat area. As the police attempted to nab the miscreants, the latter hurled two bombs at the former in an attempt to escape. But, the police managed to catch hold of all the five persons.

Police said all the five persons were involved in a series of burglary cases under Golanthara, Berhampur Sadar, BN Pur, Gopalpur and Bada Bazar police limits during the last 7 months.

Indians In Kharkiv Told To Fill Up This Registration Form Urgently