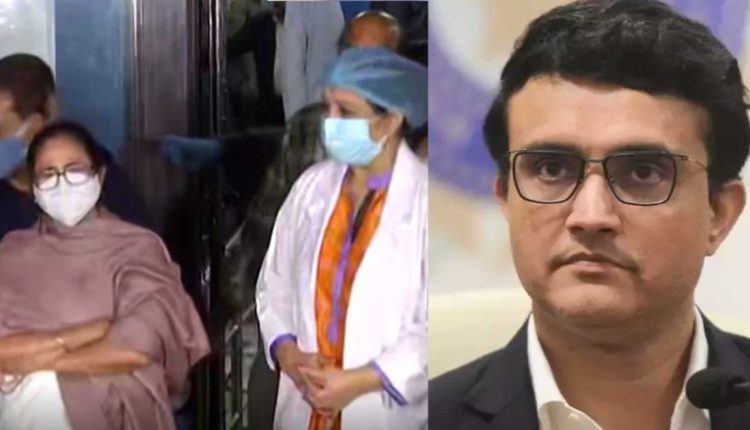 Kolkata: The minor cardiac arrest suffered by BCCI president Sourav Ganguly that led leaders of all major parties to rush to him has put speculation over his political move on an overdrive.

Ganguly at his gym complained of chest pain and uneasiness and was rushed to Woodlands Hospital where after angioplasty it was found that there are three blockages in his arteries and one stent has also been implanted.

Leading the political leaders, Trinamool Congress president and chief minister Mamata Banerjee in a tweet wished Ganguly a speedy recovery. Later, she went to meet the former skipper in the hospital and also talked with the doctors of the medical board.

“It is difficult to accept that such a young and fit sportsperson like him suffered a cardiac arrest. Ganguly is stable and also spoke with me. I have also spoken to the treating doctors and told them to take all measures while treating Ganguly,” said Banerjee after coming out of the hospital.

The BJP was also prompt to reach out to Ganguly and his family. In fact, speculation of Ganguly joining the saffron party made rounds after he met West Bengal Governor Jagdeep Dhankhar for two hours some time back. The former Indian skipper also shared the dais with Union Home Minister Amit Shah at Feroz Shah Kotla stadium while inaugurating the statue of former Union Finance Minister Arun Jaitely.

After getting the news of Ganguly’s illness on the day, Dhankar spoke to the doctors of the hospital and also visited him. “I have talked to the doctors who said they were providing best possible treatment. I have instructed them to inform me for every help. We are really proud of Ganguly as he has won several laurels for the country. He is fit now and I hope that he will get on the field sooner than later,” said Dhankhar.

According to sources close to Ganguly, Union Home Minister Shah also spoke with the former’s wife Dona and enquired about his health.

Not to be left behind, Left Front leader and senior politburo member Sujan Chakraborty also visited Ganguly at Woodlands Hospital. “The BJP and the TMC are trying to capitalise the situation for the upcoming Assembly polls. I visited the hospital is just to see the ‘Pride of Bengal and India’,” he said.

Meanwhile, cardiologist Aftab Khan, a member of the medical board, said, “Ganguly reached the hospital within the golden hour which helped us begin treatment on time. Preliminary investigations indicated a cardiac condition and an angiography was done. It revealed three blockages, including a 90% block in one of the arteries. An angioplasty was done to remove it and a stent has been implanted. He will be under observation for 48 hours and further action will be taken by the board in due course.”