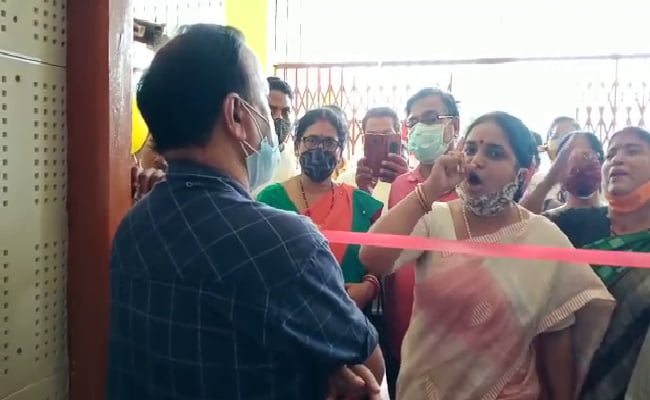 Bhubaneswar: The BJP workers on Monday vehemently protested against the absence of posters of Prime Minister Narendra Modi at vaccination centres, where those of Chief Minister Naveen Patnaik were displayed prominently, in four districts of Odisha.

This came amid the statewide vaccination drive on campaign mode launched by the Odisha government with a target to vaccinated three lakh people a day from June 21, in line with the Centre’s announcement of free vaccination for those in the 18-44 age groups.

In Balasore, BJP supporters snapped the ribbon meant to be cut to kick off the drive at the Gandhi Smruti Bhawan. They also got into an argument with the officials on finding that posters and banners of PM Modi were missing at the site.

The health officials told them that they have no political affiliation and their job is to ensure that people, who turn up at the centre, are vaccinated. But they continued with the protest and placed a poster of PM Modi at the site.

In Jeypore, the BJP workers gheraoed the Chief District Medical Officer (CDMO) office. On being informed, police rushed to the spot and brought the situation under control.

The BJP workers heckled health officials at the vaccination centre at  Utkal Gourav Madhusudan Institute of Technology (UGMIT) in Rayagada town. “While the Prime Minister has announced free vaccination for all, the BJD government is trying to gain mileage from it by putting up posters of the Chief Minister,” a BJP worker said.

In Angul, the irate BJP workers tore the posters of the Chief Minister at the vaccination centre on the stadium premises.

Condemning the incident, BJD vice-president Devi Prasad Mishra said there should no politics over vaccines.

“The vaccine belongs to the people as the Centre has purchased it with their money. Hence, there should not be any vaccine in the name of Modi, Naveen, Mamata, Stalin, Nitish etc. In my opinion, no poster of any leader should be put up at vaccine centres,” he added.

Refuting the claims of the BJP that the Centre has announced to bear the expenses towards the free vaccination from the central fund, Mishra said that the states have made a sizeable contribution. “All I can say that this is mean politics,” he pointed out.