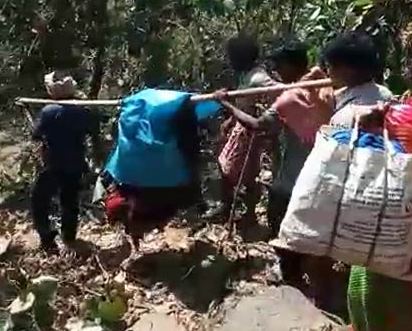 Berhampur: Motorable roads are still missing in the interior parts of Odisha and the worst sufferers are expectant mothers as ambulances often fail to reach their doorsteps on time.

On Saturday, a pregnant woman was carried on a cot for nearly 15 km at Kaduabada village under Patrapur block in Ganjam district. The reason: Ambulance could not reach the village because of poor roads.

Heeramani Nayak, wife of Rabindra Nayak, of the village complained of labour pain on Saturday morning. When ambulance failed to reach the village, her family members with the help of villagers carried her on a cot for 15 km to reach Talakuandhala. She was then carried in a government vehicle to Patrapur community health centre.

The woman was later shifted to the MKCG Medical College and Hospital in Berhampur as her condition deteriorated.

On October 8, a pregnant woman had to be carried on a stretcher at Pabiliguda village under Chitrakonda block in Malkangiri district.

Parbati Khara of Pabiliguda village was carried on a stretcher through an unpaved road after she complained of labour pain and then on a motorcycle to the hospital with the help of an ANM, supervisor and villagers.

On October 4, another woman was carried on a cot at Chaulasuli village under Bangiriposhi block in the district.

The 102 ambulance failed to reach the village due to inaccessible road. The villagers carried the pregnant woman on the cot for around one km. They also had to cross a river to reach the ambulance. She was then taken to Bangiriposhi hospital in the ambulance and later shifted to Baripada hospital after her condition deteriorated.

‘Power To Be Completely Restored In Gajapati By Oct 23’