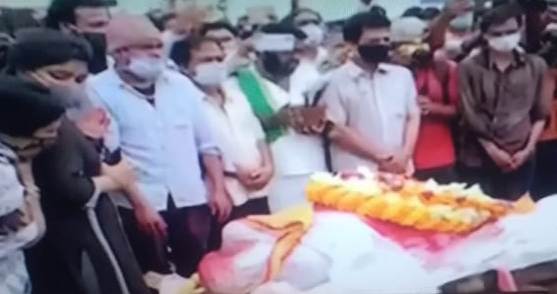 Puri: An FIR has been filed against School and Mass Education Minister Samir Ranjan Dash and BJD MLA Umakanta Samantaray for violating COVID-19 regulations while attending the cremation of MLA Pradeep Maharathy at Swargadwar here on Sunday.

The convenor of Shree Jagannath Sena, Priyadarshan Patnaik, who filed the complaint at the Sea Beach Police Station on Monday, alleged that though Nimapada MLA Dash and Satyabadi MLA Samantray had tested positive for COVID-19 a few days back, they attended the funeral posing threat to thousands of people congregated there.

Despite being aware of the danger they posed to others, the two people’s representatives participated in the last rites of the deceased leader and hence should be arrested, demanded Patnaik.

Minister Dash, on his part, said he had tested COVID-19 positive on September 14 and was discharged from Ashwini Covid hospital on September 21. Since then he was in home isolation for 20 days. Therefore, he attended the funeral, he added.

Though he claimed that he had not violated any guidelines of the state government, he admitted that a negligible percentage of virus load was detected in him when he had tested on September 27 for which he did not attend the Assembly session.

Legislator Samantaray had on September 28 tweeted that he had tested positive for COVID-19.

However, the Satyabadi MLA was not available for comment on this matter.