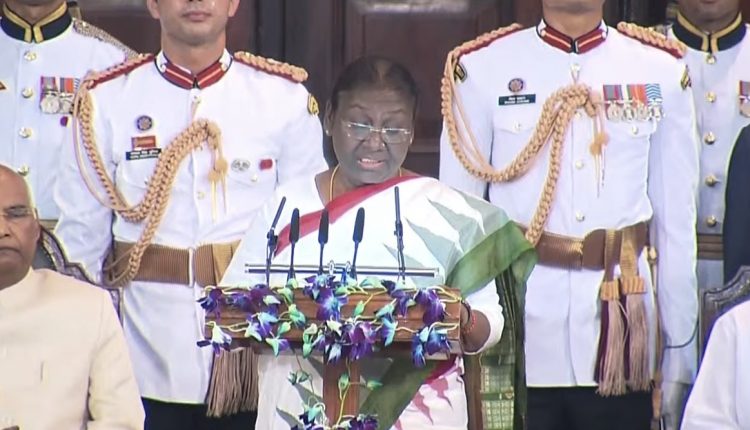 New Delhi: After being sworn in as the 15th President of India, Droupadi Murmu on Monday said that she was honoured to take charge at a time India is completing 75 years of Independence.

Murmu began her address with “Sabhi Ko Juhaar!”, greetings in her local dialect. The native of Odisha’s Mayurbhanj district referred to her tenure as a teacher at Sri Aurobindo Integral School in Rairangpur and how she constantly has been inspired by Sri Aurobindo’s thoughts.

The President also quoted Santha Kabi of Odisha Bhima Bhoi in her speech. “In my life so far, I have realised the meaning of life only through public service. There is a line from the poem of Bhim Bhoi Ji, a famous poet of Shri Jagannath Kshetra-“Mo jibana pachhe narke padithau, Jagata uddhara heu”. That is, working for the welfare of the world is far greater than one’s own interests,” she said, adding that it has always been a motto in her life.

“With the spirit of welfare of the world, I will always be ready to work with full loyalty and dedication,” she said.

The first President to be born in independent India further said that reaching the highest post in the country was not a personal achievement but that of every poor in India. “It is the power of our democracy that a daughter born in a poor house, a daughter born in a remote tribal area, can reach the highest constitutional post of India,” she said.

“Satisfying to me that the people who were devoid of development for years — the poor, Dalits, backward and the tribals — can see me as their reflection. My nomination has the blessings of the poor. It’s also a reflection of the dreams and capabilities of crores of women,” she added.

Murmu is the first tribal woman in the country and the second woman after Pratibha Patil to hold the top constitutional post. She is also the second from Odisha after VV Giri to occupy the highest office in the country.

She further said that countless freedom fighters like Netaji Subhash Chandra Bose, Jawaharlal Nehru, Sardar Patel, Baba Saheb Ambedkar, Bhagat Singh, Sukhdev, Rajguru, Chandrasekhar Azad have set an example by putting pride of the nation above all. “The tribal contribution to the freedom struggle was further strengthened by Santhal Revolution, the Paika Revolution, the Coal Revolution and the Bhil Revolution. We were inspired by the sacrifice of ‘Dharti Aba’ Bhagwan Birsa Munda for social upliftment and patriotism,” she said.

Rain To Continue In Bhubaneswar & 10 Odisha Dists Till 1 PM