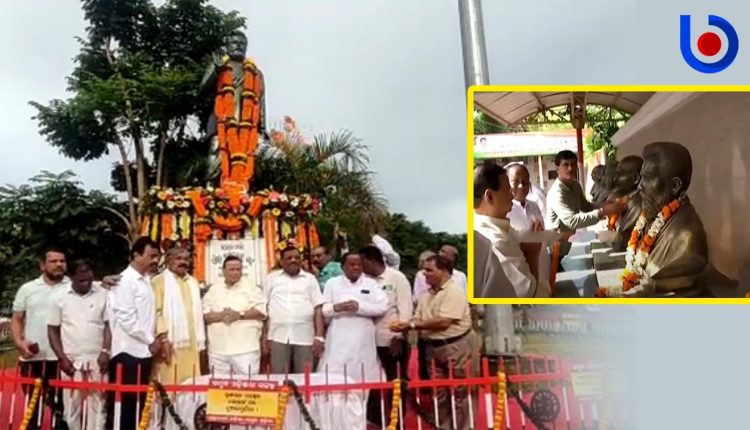 Bhubaneswar: President Droupadi Murmu, Odisha Chief Minister Naveen Patnaik and Union Minister Dharmendra Pradhan paid rich tributes to Utkalmani Gopabandhu Das on his birth anniversary on Sunday and said his patriotism will act as a guiding force for all times to come.

Born on this day on 1877, Gopabandhu Das was among the pioneers and social reformists whose substantial contribution to the Odia literature and society gave a special identity for Odisha.

As tributes for the great patriot poured in from all sides, President Droupadi Murmu in a Twitter post hailed him as a freedom fighter and litterateur and said his patriotism will guide people in future.

I pay my sincerest homage to Utkalmani Pandit Gopabandhu Das on his birth anniversary. A freedom fighter, litterateur, editor & nationalist poet, he was service and sacrifice personified. His patriotism will guide us for all times to come.

Chief Minister Naveen Patnaik said the effort of Gopabandhu Das in building an educated society and in making Odia lierature sturdier would be an inspiration.

Offering his tributes to the great educationist, Union Education Minister Dharmendra Pradhan said that his message of ” Service to mankind is equal to to the service of almighty” would be inspirational.

The Odisha unit of Congress also observed the birth anniversary of Gopabandhu Das in its office premises with leaders paying floral tributes.

Former Pradesh Congress Committee (PCC) President Niranjan Patnaik said his contribution to form Odisha unit of Congress party and during the non-cooperation movement against Britishers would always be indelible in the minds of people.

“His ideals and values in building a progressive society would always be an inspiration for the coming generation,” he added.

Gopabandhu das founded newspaper “The Samaja” on October 4, 1919 to advance the growth of Odia language and spread awareness among people about the language. He died following illness in Lahore on June 17, 1928 while raising funds for the flood affected people of Odisha.