Presidential Polls: Ballot Box Arrives In Odisha Capital; Do You Know ‘Mr Ballot Box’ Travels On Flight As A ‘Passenger’? 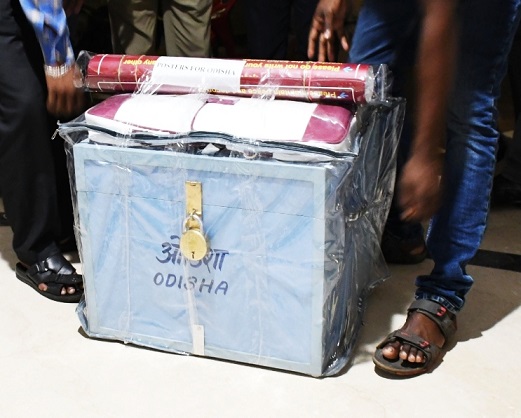 Bhubaneswar: The ballot box and other polling material for the Presidential elections, which will be held on July 18, arrived in Odisha’s capital on Tuesday evening.

From the airport, it was taken to the Odisha Legislative Assembly amid tight security. Polling officials have also reached Odisha.

Meanwhile, with the Election Commission of India (ECI) notifying that the polling for the Presidential elections will be held on July 18 between 10 am and 5 pm, the Secretariat of the Odisha Legislative Assembly has issued a notice, stating that polling will be held in Room No. 54 (first floor) of the Assembly building, where all elected members of the House will cast their votes.

Any Member of Parliament or of any State Legislative Assembly permitted by the ECI may also cast his or her vote at the aforesaid place between the hours so fixed by producing such permission before the Presiding Officer, the notice said.

The ECI on Tuesday started the distribution and dispatch of designated ballot boxes, ballot papers, special pens, and other sealed election materials to the State Legislative Assembly Secretariats including the National Capital Territory of Delhi and UT of Puducherry for the conduct of the Presidential elections.

The ballot box for the Presidential elections is sent to different states by flight. For this, the ECI books a seat on the front row of the aircraft for “Mr Ballot Box”, which is indicated in the passenger manifest.

An Assistant Returning Officer (ARO) sits next to “Mr Ballot Box”, which travels under the personal supervision of the officer.

The ECI got special permission from the Civil Aviation Ministry in 1969 to allow the ballot boxes and other election materials to travel as “passengers”.