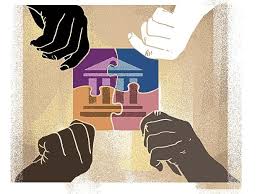 New Delhi: The Government of India has drawn a list of four primarily state-owned banks to trim its majority stakes – Punjab and Sind Bank, Bank Of Maharashtra, UCO Bank and IDBI Bank, in which it owns through direct and indirect holdings.

The Prime Minister’s Office has written a letter to the Ministry of Finance to speed up the process as the government wants to overhaul the banking sector. It intends to push the privatisation of banks and other state-run companies to help generate revenue amid a fall in tax collections due to the economic downturn caused by the pandemic, reported Reuters.

According to the report, the move to privatise banks also comes ahead of an anticipated surge in bad loan growth at the lenders, which could force the government to inject fresh funds to bail out these state-run lenders.

Some officials have reportedly advised the government to restructure these banks before privatisation to cut down their losses by offering voluntary retirement to surplus staff and closing loss-making domestic and overseas branches to make them more attractive assets, reported Reuters.