Project Plan For Kakatpur Mangala Temple Development In Odisha In 15 Days; Puri Medical College Work To Be Over By June 2023 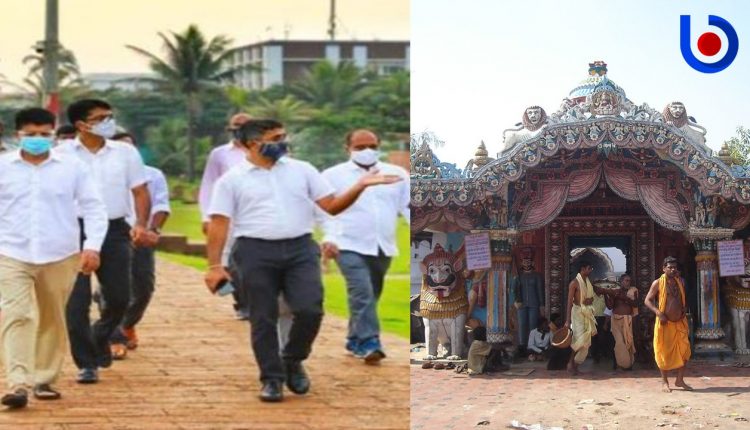 Bhubaneswar: A comprehensive project report will be prepared within 15 days for overall development and beautificaiton of Maa Mangala Temple at Kakatpur in Odisha’s Puri district.

Direction in this regard was given when Secretary (5T) to Chief Minister V K Pandian visited the temple on Saturday morning and held discussions with the servitors and residents of Kakatpur.

The 15th-century Maa Mangala temple, a symbol of ancient Shakti Pithas,  is situated at the eastern bank of holy river Prachi and a large number of devotees visit the shrine everyday to seen her blessings.

The temple has a close association with Puri Jagannath Templei. It is believed that when the wooden idols of Lord Jagannath, Lord Balabhadra and Devi Subhadra are replaced during the Nabakalevara rite, priests of the temple in Puri pray to Mangala in the Kakatpur temple to give them divine guidance. The goddess appears in their dreams and reveals the location of the three divine Daru Bramha trees from which idols of the deities are made.

Therefore, the Chief Minister has given direction for taking steps for the development of the temple under 5T initiative. While drainage system will be improved substantially, various amenities including vehicle parking facility will be provided for the convenieice of devotees.

While a comprehensive project report will be prepared in consultation with temple servitors and trustees as well as locals, the proposal will be placed before the Chief Minister for approval. The project plan will be prepared by the Odisha Bridge Construction Corporation (OBCC), Pandian said.

Earlier, Pandiian visited Puri and inspected the heritage corridor project and works at Sri Jagannath Medical and Hospital after offering prayer to the trinity at Shree Jagannath Temple.

It was revealed that the work for the Medical College which is under construction at Baliguali will be completed by June, 2023.

Pandian also visited Konark and witnessed the work going on for the expansion of the Konark-Chndrabhaga highway, new ring road and beach development.

He directed the officials concerned to ensure completion of thw highway expansion work by April, 2023.

He was accompanied by Puri Collector Samarth Verma and other senior officials.

71% Indians Want Flights From China To Be Suspended: Survey