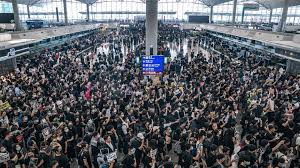 In a first for the aviation industry in all likelihood, all flights from the airport were cancelled from 4 PM onwards. The protesters disrupted daily operations inside the terminal building and prevented passengers from checking in and clearing airport security, media reports said.

The protests began over plans weeks ago that would have allowed extradition from Hong Kong to mainland China.

Metro services and bus services to the airport was stopped as the mass of people stormed the airport as their next target. During the weekend, they had crippled life in the various districts of the city.

BBC quoted officials saying incoming flights will be allowed to land but the scheduled departure has been cancelled.

Process For Census 2021 Begins In Odisha