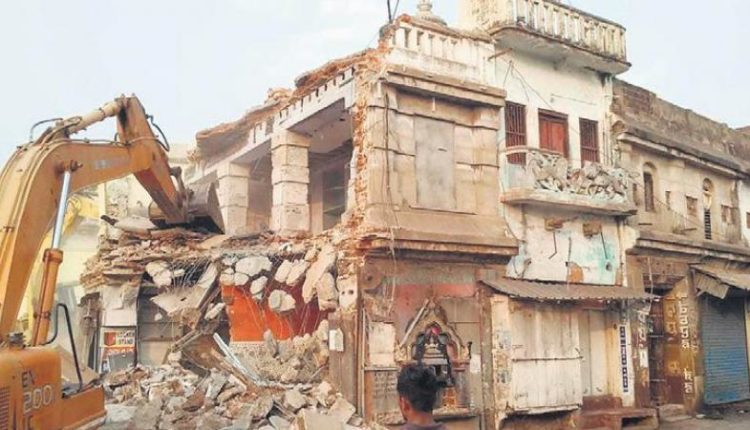 Puri: After a gap of almost a year,  Rs 3,200-crore Puri Heritage Corridor project work resumed with a portion of the historic Radhaballav mutt, where poet Jaydev composed Geeta Govinda, being pulled down on Monday.

It falls in the Heritage Security Zone within the 75-metre radial distance of Meghanad Prachir of Shree Jagannath Temple.

Around 13 shops and commercial outlets, popularly called ‘Kansari Patti’, that extends around nine-metre in front of the mutt building are set to be demolished.

Several platoons of the police force were deployed to regulate traffic during the demolition drive, which was carried out in the presence of Sub-Collector Bhabataran Sahu.

“The eviction drive is being carried out smoothly. The mutt will be paid Rs 1 lakh a month till new shops are allotted. The old temple of the mutt is being reconstructed,” the sub-collector said.

“A small portion of the mutt lies in the 75-metre radius and we are willing to sacrifice the patch of land for the heritage corridor project,” he was quoted as saying by UNI.

One of the oldest mutts of Puri, it was founded by Nimbarkacharya in 1168 AD during the reign of King Chodagang Dev. It was built to propagate Radha Krishna Bhakti cult.

It was Nimbarkacharya who began the tradition of dressing Lord Jagannath in special Krishna Besha during the last four days of the month-long Kartik Brata.

Later, Lala Sevakram, an ardent follower of Nimbarkacharya, established the mutt in front of the 12th-century shrine and dedicated it to the spread of the cult.

Though mutt stands on an acre of land, it has thousands of acres of farmland across the state.