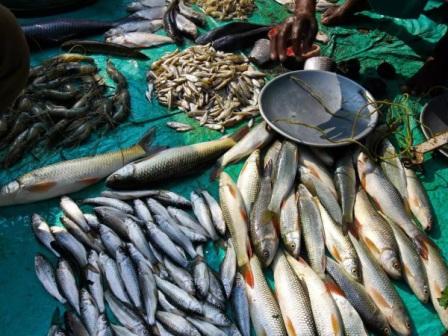 Puri: Delay in the ambitious fish market project taken up at a cost of Rs 6 crore in Odisha’s Puri town has triggered anger among the locals as traders continue to sell fish and other marine food items in unhygienic condition.

The “Hygienic Fish Market” project which aimed to make available various sea foods such as fish, crab and prawn under one roof and accommodate over 200 traders is nowhere near completion.

As more than one-and-a-half years have elapsed since the deadline set for its completion, civil society groups have expressed displeasure over the inordinate delay in the project saying the littered waste is creating a foul smell.

The Fisheries department had in 2019 finalised a detailed project report for the construction of a two-storey building with modern facilities to accommodate vegetable and fish traders in front of Talabania Police station.

The desired location was close enough to the nearest micro compost which made it very favourable. However, despite the set target of 2021, the project has completed only one floor of the building.

Puri district Collector Samarth Verma said necessary steps are being taken by the administration to ensure completion of the project at the earliest.

Admitting that there has been delay in the project, he said the administration has reviewed the progress and asked the executing agency to expedite the work.

A science park is also proposed to be set up near the fish market and the entire area would be developed in a planned way, the Collector said.

Kate Winslet, Titanic’s Most Loved Rose Dawson, In Hospital After Accident On Set