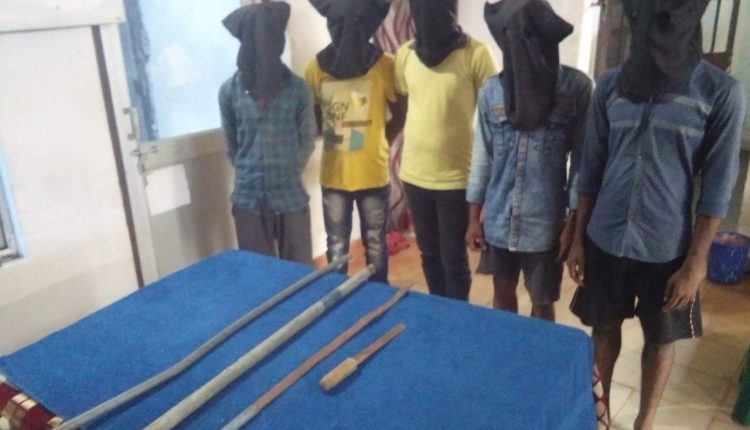 Puri: Criminal activities seem to have shaken the Pilgrim Town where cases of bombing, murder and attempt to loot have been reported in the last three days.

In the lasts two days alone, the police have busted two dacoit gangs and arrested 10 persons from two different places in the town.

According to sources, on being informed about five miscreants planning to loot a house at an under-construction stadium in Penthakata late Monday night, the police reached the spot and arrested them. Police also seized several weapons from their possession.

The arrested persons have been identified as Kartika Jali (25), Gudu Jali (20), Ramesh Behera (28), Balabhadra Barik (24), and B Ananta Behera (21). They were forwarded to the court on Tuesday.

Likewise, another group of youths had gathered near Jagannath Ballava parking area under Town police limits and were planning to commit dacoity on Tuesday.

On being informed, police conducted a raid and arrested them. Several weapons and a mobile phone were seized from their possession

It may be noted that some unidentified miscreants hurled five bombs at a shop at Atharanala on Tuesday night. Police have filed a case and started an investigation but nobody has been arrested yet.

On Sunday, a man was killed in an attack by some locals at Baseli Sahi. The deceased has been identified as Jitendra Purohit of the locality. Old enmity is suspected to be the reason behind the attack on Purohit.

Also Read: Man Killed Over Past Enmity In Puri