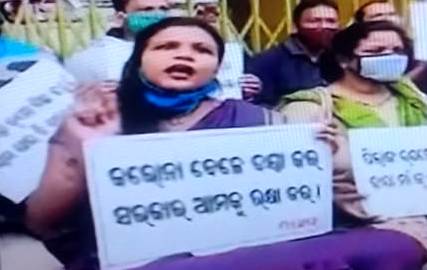 Bhubaneswar: Members of the Organisation of Parents Association Forum (OPAF) on Sunday staged a gherao at the residence of the Odisha School and Mass Education minister, Samir Ranjan Dash, at Gangotrri Nagar in the city to protest against alleged hefty fees by private schools.

The agitators alleged that some private schools have debarred their children from availing online classes as they have failed to deposit the fees.

They urged the minister to urgently intervene in the matter and initiate action against the private schools for collecting hefty fees.

Later, the minister told the media that he cannot give any statement as the Odisha Abhibhabak Mahasangh has moved the High Court on this matter.

The Principal Secretary, School and Mass Education, has submitted an affidavit in the court, he added.

On Museum Day, Know The Ones You Can Visit In Odisha Capital