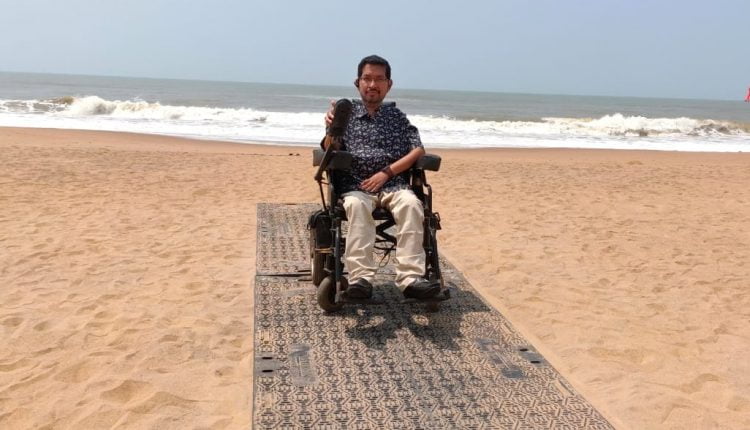 Puri: With the foundation stone of Jagannath temple heritage corridor project laid on Wednesday, quadriplegic actor from Odisha Jitendra Biswal has raised the demand for wheelchair access to the temple.

“Since there is no facility for the physically challenged people to go inside the Jagannath temple, we are deprived of having physical darshan of the deities. We have been demanding to make the temple accessible for the wheelchair-bound devotees since long,” said Biswal.

He had earlier appealed to the state government and the district administration to make Jagannath darshan for the devotees on wheelchair permissible, but no step has been taken so far.

“Now that the massive Shri Jagannath Temple Heritage Corridor project is being taken up and chief minister Naveen Patnaik was present on the occasion of laying its foundation, we expect that the much needed but much delayed issue of ensuring wheelchair access in the temple would be taken up,” he added.

“There will be a massive change due to the corridor project which will cover acres of land. Now that there will be more space and they can facilitate a ramp, I request the government to implement our long standing demand. With this facility, the elderly people will also benefit,” said Biswal.

At present, the physically challenged people are allowed to go on wheelchairs upto Singha Dwara (Lion’s Gate) in front of the temple. But they face problem to get entry into the temple as they are not allowed to take the wheelchair inside.

“Some volunteers have been deployed to help the Divyangs inside the temple. But it is not possible for some Divyangs like me to go without the wheelchair to have darshan of the deities,” said Biswal.

It may be noted that following Biswal’s request and initiative, a 50-meter ramps at sea beach in the Pilgrim Town was inaugurated in last August.

New COVID-19 Variant With ‘Unusual’ Mutations Detected In These Countries