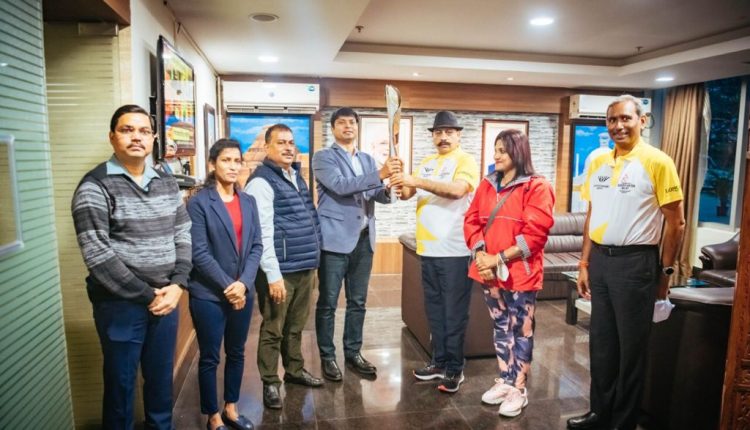 Bhubaneswar: The Queen’s Baton for the 2022 Commonwealth Games, scheduled to begin in England on July 28, arrived in Bhubaneswar on Friday.

The relay baton was received by chairman, Odisha Hockey Promotion Council, Dilip Tirkey and officials of Sports and Youth Services Department, and Odisha Olympic Association at the Biju Patnaik Airport in the city. Eminent sportspersons of Odisha, Anuradha Biswal and Shradhanjali Samantray were also present.

“It is a momentous and historic occasion for us. It is a great honour for Odisha to receive the Queen’s Baton and be part of its journey prior to the commencement of the Commonwealth Games 2022. All arrangements befitting the Queen’s Baton and its Relay has been made by the Sports Department,” said Tirkey.

After staying in the city tonight, the relay baton will go to Puri and Konark before returning to Bhubaneswar for the symbolic Relay at the Kalinga Stadium, here. Eminent sportspersons of the state will participate in the Relay.

The Queen’s Baton Relay is a build-up to the Commonwealth Games. It began on October 7, 2021 at Buckingham Palace, where Queen Elizabeth II placed her message on the Baton, signifying the start of the 294-day Relay to 72 member nations of the Commonwealth.

The Baton will leave Bhubaneswar for Singapore on January 16 and arrive back in England in July. The Commonwealth Games are expected to take place from July 28 to August 8.