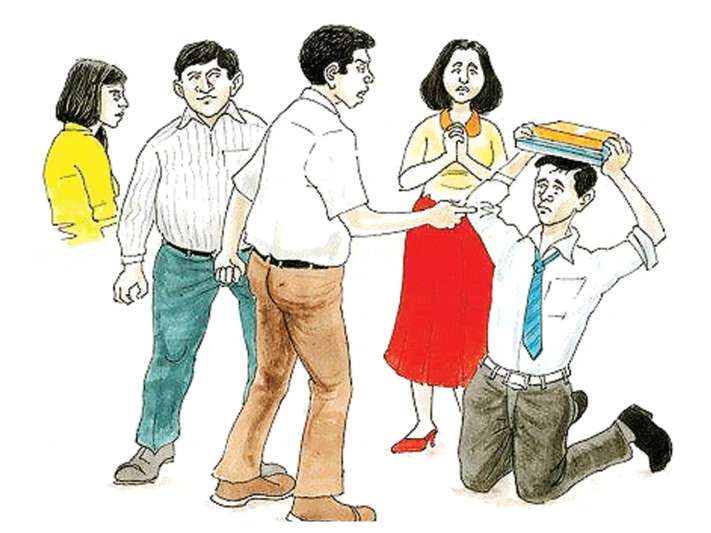 I am a student, waiting to start a new journey in the college of my dreams. Hostels, new places, living alone all of this can be overwhelming for some people in the beginning but what carries us through are the new people we meet and the friends we make.

So what do you do when those new people turn out to be monsters in hiding when they start manipulating and embarrassing you? Torturing you till you think you can’t take it anymore and tragedy strikes?

I am scared at the thought. It prevents me from enjoying the college experience if I have to keep looking out for myself against such horrific people or incidents.

First, let us understand the tradition of ragging.

Ragging can refer to ritualistic hazing or severe bullying in the initial days of an institute.  The ritual may include snide comments and teasing, performing certain activities in front of crowds, compulsion to obey orders, public humiliation, abuse in verbal and physical form, sexual harassment, and physical harm in-short mental and physical torture.

This activity is usually conducted by senior members of the college. At times, certain ‘influential groups’ get formed within the institutes that are feared amongst students, leading to open manipulation of the junior students as they are scared to inform authorities in fear of consequences subjugated by the said group.

Ragging, bullying, or hazing is not a term that has newly come to light. Every time someone joins a new environment with new people, they are slightly scared or anxious.   You could end up making new friends or finding a place for yourself in the environment, but stories of torture, of ‘targeted humiliation’ in the name of giving a taste of the real world,
make us realise problems could arise out of nothing.

What is worse is some people believe a certain amount of ragging is ‘important’ or ‘necessary’ to build character. Some believe that suffering stoically through torture will make you thick-skinned, while some think ragging ends with light-hearted, playful comments and activities. When children speak up about their incidents, they get rebuked for being too
sensitive.

Another rationalisation for ragging is to forge bonds between juniors and seniors who will mentor them, especially in engineering and medical colleges. People do not realise that such justification or belittlement of ragging results in the crossing of lines too often. It gives the students consolation that their misdoing is normal and approved. Hiding the atrocities of ragging under the name of ‘friendship’ with seniors is a disgusting way of doing away with handling such cases.

Several cases of ragging end up in physical disabilities, mental disabilities, and most importantly in suicides and murders; the Pon Navarasu case, Aman Kachroo case; the list comes down to kids in school too; beating up of 15 year old in DPS, Noida.

When a child, freshly out of high school dreams of joining college only to find out that it might be a nightmare for them, it crushes their spirits. Such torture can heavily impact the educational interests of the student, diverting them as they are too depressed or drained, and traumatising them for life, sometimes changing them or worse, killing them.

The recent case of Ruchika Mohanty, a second-year student from BJB college, who committed suicide due to severe ragging, is a prime example of a life ruined for no real reason. She did not just take her own life the incident scarred her family and the students of her college. It also ruined the life of the seniors, who never realized the extent of their
misdoings or consequences.

A single suicide took down ten more lives, but it also forced us to view the conditions in which students are compelled to live. How is it that the students of the same college, under the same authorities felt the need to humiliate the others, wield baseless power over them, to monger fear amongst them?

The mental status of every single student is so different, as they come from different environments and upbringing. When they find themselves together for eight or nine hours, sometimes living together for over five years, it becomes necessary to inculcate a feeling of acceptance and understanding amongst them. We need to establish administrations that are trustworthy, so students who feel targeted may find a safe space to voice their concerns.

According to www.tutorialspoint.com, ragging culture in some colleges is rampant due to the non-involvement of authorities or not understanding of the gravity of the situation.

We need counsellors to help the bully and the bullied. Both sides need a helping hand. Often the seniors have to go through brutal torcher and end up projecting their embarrassment on the new students, believing it to be a mandatory experience for all.

Most importantly, parents should establish a healthy relationship with their children to help them in such situations so that they don’t feel shameful, utterly helpless, or alone.

Ragging has become a norm in India, prevalent in the most prestigious institutions, especially government colleges. Although a criminal offence under the penal code and Section 116 of the Karnataka Education Act 1983, it has not yet been curbed. The cases are such that they have become human rights violations altogether,  taking place in colleges and schools worldwide. It is high time to take severe action against such cases, or students will kill each other before they even see the world.