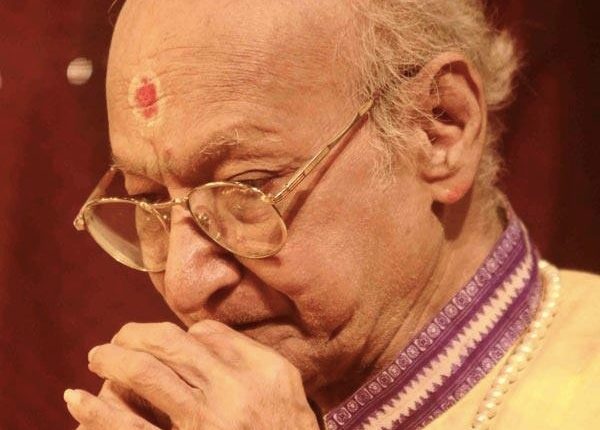 Those who have not heard Raghunath Panigrahi singing on the stage certainly have missed something extraordinary in their life. The way he used to play Harmonium and sing, that itself was a spectacle of divinity. He never sings, he becomes a song- that was Raghunath Panigrahi for pure music lovers. He poured his soul into his songs. His honey-laced voice, his crystal clear tonal flow, his playful rendition of nuances, his extraordinary throw of perfect emotion by hitting the right notes and his submerging soul inside the very flow of his music, makes him the Raghunath Panigrahi; the maverick genius Odissi. Basically, he is known to be the legend of Odissi music, but his reputation goes beyond that frame. He was equally a  powerful voice in popular genres of music. As a playback singer for Odia, Telugu and Tamil movies he was a superstar of that era. His dominating identity as the best of Geeta Govinda composers and singers of his time truly snatched away so many other laurels which he deserved.

Raghunath was Born on August 10, 1932, in a smaller town named GunuPur in the southern district of Rayagada. He was part of a large joint family where music was a way of life. He started learning music from his father and performed on smaller stages at a very early age. He belongs to the lesser-known southern style of Odissi singing or Dakshini style. After Apanna Panigrahi and Tarini Patra, Pt. Raghunath was the last torch bearer of that rare southern style of Odissi. With him, an era has ended. From the tiny town of Gunupur, he was shifted to Puri and later sent to Madras or Chennai to learn Carnatic music. His crystal clear voice and deeply moving rendition caught hold of many eyeballs in Madras and he becomes an established playback singer of south cinema in his 20s. Later he joined the Odia film industry as a playback singer and scored mega-hits like Sushama Go Tuma Ange Bhara Madhu Jochhana and Na Jaa Radhika. In the golden era of All India Radio and Gramophone Records, dozens of his tracks become highly popular and continue to remain timeless classics. Coming from a small town, the young boy becomes a superstar singer in Madras and that city had become Raghunath’s second home. There he met his soul mate Sanjukta Panigrahi, later who becomes the brand ambassador of Odissi dance and a legend on her own merit. They fell in love and tied the nuptial knot in Mumbai.

A Style Of His Own

Pt Raghunath Panigrahi was a versatile genius. He stepped into a variety of forms and genres of Indian music, starting from devotional to romantic, from playback for films to Odissi dance numbers and from sophisticated classical to free-flowing folk. His Bhajan and Odissi singing is distinctly different in style and bears a typical signature of his own. Though he was traditional in his learning and rendition, he was open to all kinds of experimentation. In his musical scoring, he mixed up lighter and highly nuanced classical and with that he created his own brand of music.

When he sings those penned by Salabega, the Muslim devotee of lord Jagannath, he prefers a style fitting to the socio-cultural class of the poet. Likewise, he prefers contemporary style while rendering his voice to those by modern poets like Gangadhar Meher, Madhusudan Rao and Laxmikanta Mohapatra. Rupa Rekha Nahin Hey Sunya Dehi, the famous Bhima Bhoi bhajan of Panditji was an example where one can find the folk-classical mixture at its best. Chandan Hajuri’s famous song Chaka Nayanaku Patita Kehi has remained the undying spirit of surrender and devotion. When he sings Laxmikanta Mohapatra’s Sabuthiru Banchita Kari, it pierces the depth of the heart evoking sympathy and spirituality. Few other notable tracks which bears the typical Raghunath signature are Sri Purusottama Jiba Mana and Kalia Dhana To Lagi Jau E Jibana.

He was best known to the world as Geeta Gobinda Panigrahi. Prithviraj Kapoor, the legendary actor, used to address him by this name. Panigrahi left a highly promising career in playback singing and devoted his life for Odissi and Geeta Gobinda. For musically sensitive Indians, Panigrahi’s Geeta Gobinda becomes their daily morning offering to the god. His voice was crystal clear. The moods and magic of Jayadeba’s poetry imbibe the quality of hypnotics in Panigrahi’s voice. His rendition of Geeta Gobinda is trans-cultural and metamorphosed this 12th-century Sanskrit poetry as the celestial love song of humankind.

Raghunath Panigrahi and Sanjukta Panigrahi as a couple remain inseparable and their unison resulted in a grand repertory of dance-based compositions in Odissi. No Odissi dance recital is complete without Panditji’s composition. Initially, he composed the Astapadis of Geeta Govinda for his wife Sanjukta and Guru Kelucharan Mohapatra. His immortal composition Ahe Nila Saila became the very insignia of Odissi dance and almost every dancer loved to dance this number at least once in his/her lifetime.

Ardhanariswara was another of his composition, which was immortalized by Sanjukta in her elegant dance style. Later it was adopted and redesigned by Nritya Gram ensemble of Bengaluru, without changing Panigrahi’s composition. He composed hundreds of musical pieces for generations of dancers, starting from Sanjukta Panigrahi to Bijayini Satpathy. The grand troika – Raghunath, Sanjukta and Guru Kelucharan Mohapatra – created the golden era of Odissi.