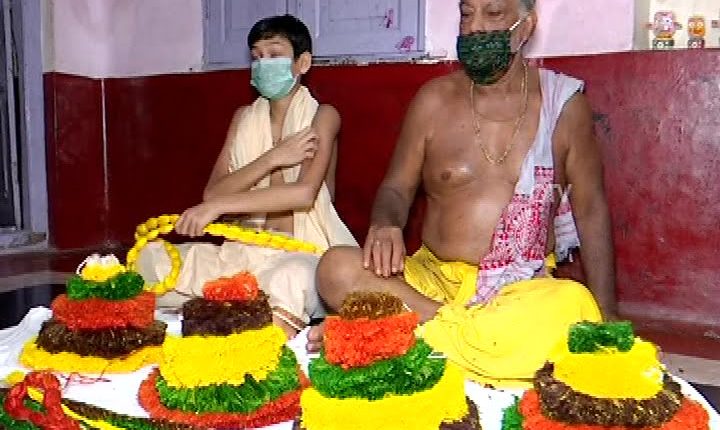 Puri: ‘Gamha Purnima’, when Rakhsa Bandhan’ is celebrated,  is an important date in the calendar of festivals of Jagannath temple in Odisha’s Puri town. Like other festivals, it also involves a number of rituals, while the ‘rakhis’ for Lord Jagannath and Lord Balabhadra are prepared through an elaborate procedure.

As per tradition, Patara Bisoyi servitors prepare the rakhis for the sibling deities, known as ‘Pata Rakhis’, which Devi Subhadra ties to Her brothers on Gamha Purnima.

The preparation of the rakhis along with 54 ‘Guamala’ (garland of areca nuts) begin after completion of Chitalagi Amavasya rituals in the temple. This year, ‘Gamha Purnima’ will be celebrated on Thursday.

“Ten days prior to the festival, the temple administration provides with ‘Basunga Pata’ (cloth). Four rakhis for Lord Jagannath and Lord Balabhadra while 10 small ones for the Parswa Devatas (minor deities) of the temple are made with ‘Basunga Pata’. The Rakhis and Guamalas are then taken to the temple,” said a temple servitor.

The Basunga Pata is dipped in red, green, purple and yellow colours. With the help of a comb, the cloth is shredded into threads. With the four coloured Patas, the servitors then make four-layered Rakhis. They are in concentric circles one atop another with the lowest disc being the largest.

According to scriptures, Lord Balabhadra, who is considered the lord of farmers, was born on the day of Gamha Purnima. Special rituals involving Lord Balabhadra are also performed in the temple on the day.