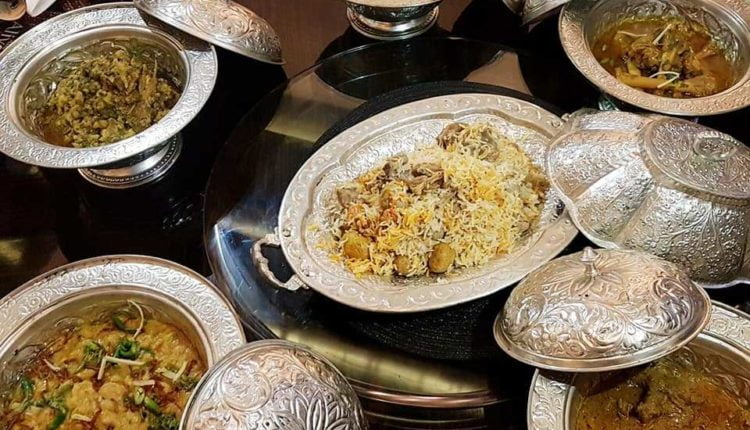 Say Rampur, and one in all likelihood will be reminded of Rampuri chaaku (the famed foldable switchblade carried by Bollywood baddies and which the Indian government had to ban after Dawood Ibrahim became big).

The town, which was once home to poets like Mirza Ghalib, is today a relatively obscure place in India’s modern geographical layout. But this was not always the case. There was a time when Rampur, a free kingdom tucked behind the lush boundaries of Lucknow, was the place to be in for every artist, chef and litterateur.

Rampur rose in prominence as the ‘university’ for most of the khansamas from the Mughal and other royal courts. This perhaps explains why Rampuri cuisine seems to be influenced by so many cuisines, importantly the Mughlai, Afghani, Lucknowi, Kashmiri and Awadhi cuisines.

With so many specialty chefs at their disposal, the Nawabs finally began developing their own cuisine, which till the time was predominantly Pasthun style. In other words, meat heavy made with less spice and mostly grilled. 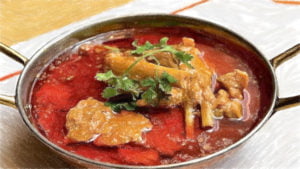 The royal kitchens of Rampur worked on a format that was the norm those days. So an expert of rice would only work on rice recipes and not meat, and vice versa. However, the Nawabs would often encourage them to explore and create new things, which allowed them to step into each other’s territories and create wonders.

The result was signature dishes like the Mithi Chawal. A rice preparation where twice the quantity of sugar/sugarcane juice was used to create a sweet pilaf (read pulao) that had the texture of biryani. You could throw the rice on the floor and it would spill out like pearls.

Pulao Marmareed, a rice dish made with garlic cloves that are rendered shiny and almost sweet in the process of cooking, giving the dish its name—a pulao with pearls — was another.

But the most exotic was the dal khichada. This simple sounding dish was in fact made of rice and lentil kernels carved out of almonds and pistachios. Such was the artistry required in this dish that even the Nawab had to inform at least two days in advance for the dish to be prepared. And yet the Nawab didn’t have the liberty to ask for more than what was served, which was done by the chef who prepared it.

The doodhiya biryani was yet another example of culinary excellence. The dish characterised by its white colour used milk to create a biryani that looked like white sheet, and was one of the few dishes that were served by the chef who used his palm as ladle.

Old court documents show that using the hand as ladle to serve dishes, especially the vegetarian shorbas and curries as it was believed that such serving helps enhance the flavour of a dish. Of course from the chef’s point of view, this was an excellent way to ensure that the portion sizes were right for everyone, and the food never fell short.

Yet another interesting fact about the cuisine was the use of spice blends. The Rampuri Chaat Masala for instances uses more ginger compared to the Delhi Chaat Masala; the Rampuri Korma—unlike regular ones with a white gravy rich in cashew nuts—is identified by its red gravy, which is not due to red chillies but tomatoes.

In fact, the royal kitchens were famous for using ingredients like lotus seeds, banana flower, khus ki jhad (roots) and sandalwood to give their dishes a unique flavour.

The first iteration of kele ka kebab, kathal ke seekh and alu ke kebab was introduced in the Rampuri court before it made its way to the other courts of India much like the famous adrak ka halwa.

Folklore has it that one of the descendants of Nawab Khan had to have a good quantity of ginger to get his health back. But due to the sharp taste, the Nawab would often avoid it and find excuses to skip it. That’s when the royal sweetmakers were entrusted with the work of bringing out a more palatable way of feeding the Nawab his quota of ginger. The chefs worked relentlessly, and after a week presented their dish, which was placed nonchalantly between the regular lunch buffet. It was a general practice those days to be discreet with any new innovation. If, in spite of that, it caught the Nawab’s attention, the dish was worked on and then the final dish was presented in a ceremony that was akin to the Master Chef competition today. So after a week, the Nawab was presented with the dish in a similar manner. Enticed by the unusual colour, the Nawab asked for the dish twice before he was told that it was adrak. But by then the Nawab had taken a liking to the dish and it became one of the royal favourites, much like the mirch ka halwa, which came a few years after ginger and reached the Bhopal court.

Many believe that the ‘do pyaza’ dishes that use browned as well as raw onions came from the kitchens of Rampur, where onions were used both to give the dish a sweet and sharp taste.

Innovative usage of ingredients was a forte of the chefs of Rampur. The usage of bottle gourd and papaya to tenderize meat for kebabs and curries first began in Rampuri kitchen, and also the use of varq. The famous sweetmeat garnish today was put to clever use in the Rampuri court, where instead of the parda (made of maida), which was present in the Mughal court, silver or gold varq were used to serve dishes.

This had a dual purpose: first to keep the dish warm and moist, and two, it ensured that the dish wasn’t tampered with. Such was the finesse of the varq used in the kitchen that even the slightest touch would tell that the dish has been touched and immediately rejected.

So how does one really differentiate between Rampuri cuisine and others? With most of the surviving khansamas or chefs unwilling to part with their family recipes, most of the dishes served today are interpretations of the few individuals who have tried reviving this almost extinct cuisine.

What remains however is the usage of spice in the food, which is minimal yet effective. Unlike the hot spices of Old Delhi; sourness of Hyderabadi food and sweetness of Awadhi khana, Rampuri cuisine is characterised by the use of ginger, onions and a mix of javitri (mace) & jaiphal (nutmeg) and khus roots.

And then of course some are identified by the names like the Sabz Akbari was named after the famous Mughal Emperor and his nine gems, the Noorjahani Datia is said to be an ode to the famous queen and the now extinct Kebab e Faizullah was to the Nawab itself. It is said that the meat was kept medium rare given the Nawabs love for meat.