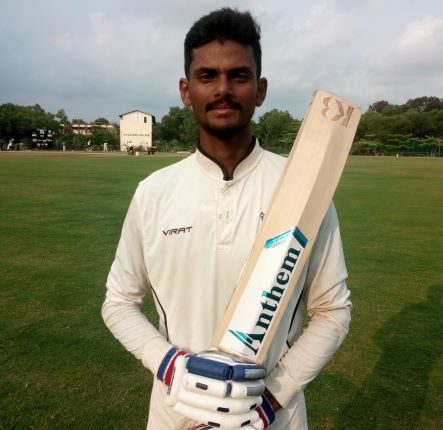 Batting a second time, Haryana reached 119/1 at stumps on the third day with Ankit Kumar unbeaten on 59.

With just a day’s play remaining, Haryana are 43 runs ahead. Unless Odisha collapse in their second innings, a draw is on the cards, which will fetch the home team 3 points courtesy the first-innings lead.

Skipper Subhranshu Senapati, who resumed this morning on 42, was dismissed for 63. Biswal batted steadily at the other end but lost three partners – Govinda Poddar (10), Sujit Lenka (26) and Prayash Singh (13).

At 328/7, Odisha were still 10 runs behind the Haryana total. Kartik then found an able partner in tailender Suryakant Pradhan, and the duo took it on themselves to build up a decent lead for Odisha.

Kartik, who made his first-class debut earlier this month against Baroda, reached his century in 175 balls, hitting 14 boundaries.

Suryakant, on the other hand, used the long handle to plunder 60 runs off just 27 balls with 6 fours and 5 sixes.

Tarani Sa then sent back Haryana opener Yuvraj Singh, but Odisha were denied another wicket on the third evening.