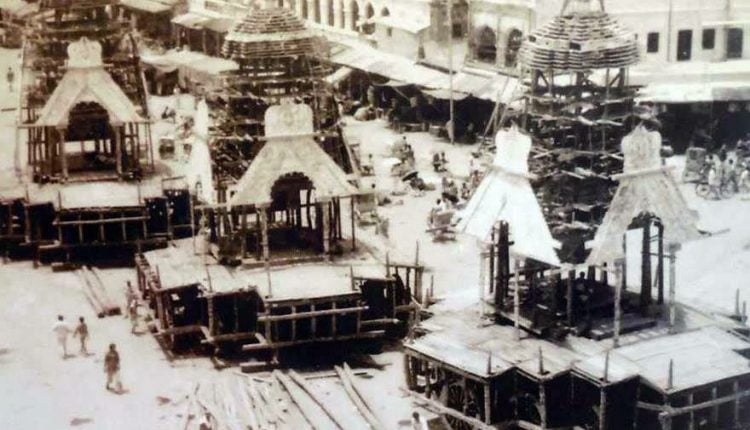 Puri: Rath Yatra in Odisha’s Puri is being conducted sans devotees for the second consecutive year. The Padhandi ritual has begun with servitors escorting Lord Sudarsan to the Devadalana – the chariot of Devi Subhadra, and Lord Balabhadra to Taladhwaja chariot in ceremonial Pahandi amid the beating of bells and cymbals.

COVID pandemic had cast a shadow on the annual sojourn of Lord Jagannath and his siblings with the Supreme Court initially putting a ban on the festival last year. Later, it allowed the pulling of the chariots on Bada Danda under strict COVID guidelines.

A peep into the history of the Jagannath Temple reveals that the grand festival was not held for 32 years due to attacks on the temple by Islamic rulers between 1568 and 1735.

Below is a chronology of the attacks on the 12th-century shrine:

—Following an attack by Kala Pahad, a general of Bengal king Suleiman Kirrani, on the temple in 1568, the Rath Yatra could not be held for nine years from 1568 to 1577.

— In 1601, Mirza Khurum, a commander of the Bengal Nawab attacked the temple. But the priests saved the idols by shifting them to the Panchamukhi Gosani temple at Kapileswar, about 13-14 km from Puri. Due to the shifting of the idols, the Rath Yatra could not be held.

—In 1607, Qasim Khan, the Mughal subedar of Odisha, attacked the temple. The idols were hidden and taken to Khurda and kept in the Gopala Jew temple. As a result, the Rath Yatra could not be held.

—The Rath Yatra was not held in 1611 after Kalyan Mal, the son of Todar Mal (a famous courtier of Akbar), became subedar of Odisha and attacked the temple. The idols were shifted beforehand to Mahisanasi in the Chilika lake.

—The festival was not held in 1617 after Kalyan Mal attacked the temple for the second time. Before the attack, the priests shifted the idols to Gurubaigarh in Chilika lake.

—In 1621, the idols of the Lords were shifted to Andharigarh in Banapur following an attack by the Muslim subedar Ahmed Beg on the temple. Later, the Brahma of the idols was taken to Gadamanitri village in Khurda district. Due to the shifting of the idols, the Rath Yatra could not be held for two years in 1621 and 1622.

—In 1692, Ekram Khan, the Mughal commander in Odisha attacked the temple. Prior to the attack, the priests shifted the idols to a place behind the Bimala temple in Khurda. From there the idols were taken to Gadakokala village near the Chilika lake and then to Bada Hantuada village in Banapur where they were kept till 1707. Due to the absence of the deities in Jagannath t=Temple in Puri, the Rath Yatra could not be held for 13 years.

— The festival was not held in 1731 after Mohammed Taqi Khan, the Naib Nazim (Deputy Governor) of Odisha attacked the temple. The idols were taken to Kankanasekhari Kuda in Chilika lake and then shifted to Harishwar Mandap at Nairi village in Chilika tehsil in Khurda district and finally to Chikili village near the foothill of Chakadimbiri in Khallikote in Ganjam district.

—As Taqi Khan attacked the Jagannath temple for the second time in 1733, the idols of the Lords were shifted to Harishwar Mandap and then to the Marda temple near Hatibari hill in Polasara of Ganjam district where the priests had performed secret rituals for more than two years. As a result, the Rath Yatra could not be held for three years from 1733 to 1735.

In Pictures: Pahandi Ritual Of Lords Begins In Odisha’s Puri

Out Of The Ordinary: Former Bureaucrat Grows Pearls In Her Backyard At Odisha’s…