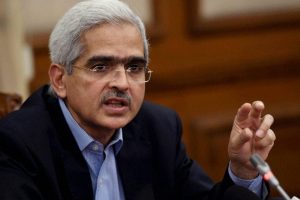 New Delhi: The Centre on Friday decided to extend RBI Governor Shaktikanta Das’ tenure for three years till December 2024. Das’ re-appointment will be effective from December 10 or until further orders, whichever is earlier.

“The Appointments Committee of the Cabinet has approved the reappointment of Shaktikanta Das as Reserve Bank of India Governor for a period of three years beyond 10.12.2021 or until further orders, whichever is earlier,” an official statement was quoted as saying by The Indian Express.

Das was a former secretary of the Department of Economic Affairs from 2015 to 2017.

A 1980-batch Tamil Nadu cadre IAS officer, Das was given the responsibility to oversee the re-monetisation of the economy. This was after the sudden decision to withdraw 86 per cent of the currency in circulation in November 2016.