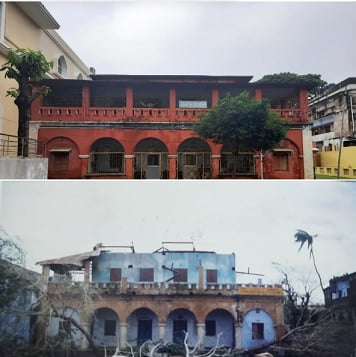 Berhampur: On this day 22 years back, Odisha experienced one of the most devastating natural calamities – a severe cyclone. The cyclone with an estimated speed of around 200 kmph tore through the state’s southern region. The Nature’s wrath was so devastating and so overwhelming that Ganjam caught national attention as a victim of natural disaster.

Here’s a recount of the spine-shivering dark night and the days after the severe cyclone in Ganjam district, which was the worst affected in the state.

As forecast earlier, the cyclonic wind started whistling in the evening of October 17, 1999. As it picked up speed, noise was frightening. No one stepped outdoors. The night was pitch dark.

The cyclone made landfall at Gopalpur late evening. Asbestos sheets got torn, trees fell and electric poles were twisted.

According to official documents, 197 people perished and rendered three lakh people homeless. An estimated 600 villages with a population of 21 lakh people in 18 out of 22 blocks in Ganjam were affected. Government properties worth more than Rs 609 crore were damaged,

For most of the people of the district, if the severe cyclone was a new experience, the aftermath was worst. Semi-urban and rural areas in Ganjam plunged into darkness for 25 days. Drinking water supply was also badly affected. The damage to the infrastructure in Ganjam was huge.

The district administration requested 175 NGOs including Aga Khan Foundation, Oxfam, CARE, Unicef, Cida and others to help. AMRUT (Ananda Marga Universal relief team) was engaged in relief works. The relief in Ganjam district stopped after 10 days as the officers engaged in post-cyclone operation marched to other parts of coastal Odisha after a super cyclone made landfall near Paradip on October 29. Ganjam too was hit, compounding its losses and suffering.

Fire Breaks Out In Cuttack’s Incense Factory, No Casualty Reported