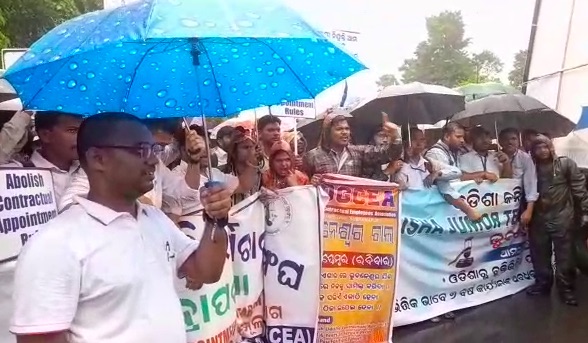 Bhubaneswar: In a relief for the protesting contractual employees, the Odisha government on Monday agreed to consider the demands and urged them to withdraw the stir.

According to sources, a meeting was held between the state government officials and the OGCEA) this afternoon and the talks were positive.

President of OGCEA Bijay Kumar Malla said the state government has agreed to look into the matter and take steps within 15 days. “If the issues are not addressed, we will decide the next course of action,” he said.

Braving heavy rain, members of OGCEA, including teachers, police, assistants and other Class-III employees from across the state, merged at Mahatma Gandhi Marg to demand uniform service rules for all categories of employees and abolition of the contractual appointment system.

Despite being highly educated, the employees draw a paltry salary, the association said, adding that the six years of contractual service is not added to the original service period for which promotion is delayed by six years.  The contractual employees are also not getting DA, HRA and other benefits.