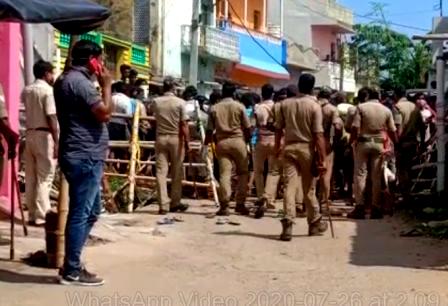 Puri: Tension ran high in the seaside area of Penthakata in Odisha’s Puri town on Sunday after residents of the containment area created a ruckus over COVID-19 test reports.

According to sources, the district administration on Friday declared 15 areas in four wards of Penthakata area as a containment zone and the restrictions were to be imposed from Saturday 9 pm. Swab samples of four persons were also collected for tests.

On Saturday evening, the residents, demanding the test report of those four persons, manhandled ASHA and Anganwadi workers. Following which, police rushed to the spot and tried to pacify the residents. To disperse the crowd which refused to relent despite their intervention, police then had to resort to a mild lathi-charge.

Protesting against the police action, hundreds of residents, including women of Penthakata area, hit the streets the following morning.

Puri SP Akhileswar Singh, accompanied by the additional SP and two platoons of police, soon reached the spot and brought the situation under control, the sources added.