Rhea Chakraborty’s Mother Defends Her Relationship With Mahesh Bhatt; Know What She Has To Say

Mumbai: After Sushant Singh Rajput’s father denied any knowledge of his son’s relationship with Rhea Chakroborty, the latter’s mother Suhrita Das spoke out about her daughter’s struggle with Sushant. She revealed how Rhea fought hard to keep up with Sushant’s instability.

Rhea had accepted in a statement to the police that she and Sushant were planning to get married. She also revealed that Sushant was diagnosed with depression. She said that his mentor, Mahesh Bhatt, had also advised her to leave Sushant because of his mental condition. This statement has led to an uproar among fans who then questioned her and the veteran director’s relationship. 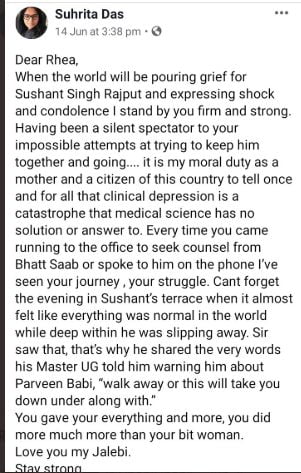 Mother Suhrita’s post has also attracted backlash from fans who have accused her of being a paid member of the Bhatt-camp trying to dub Sushant as mentally unwell.

Suhrita also confirmed that Rhea used to consult Mahesh Bhatt every time she was worried about Sushant getting frustrated. She also confirmed that he had asked Rhea to quit the relationship. Suhrita claimed Bhatt drew similarities between Parveen Babi’s mental health condition and that of Sushant’s.

Also Read: Dramatic Spike In Search For ‘Nepotism In Bollywood’ On Internet Post