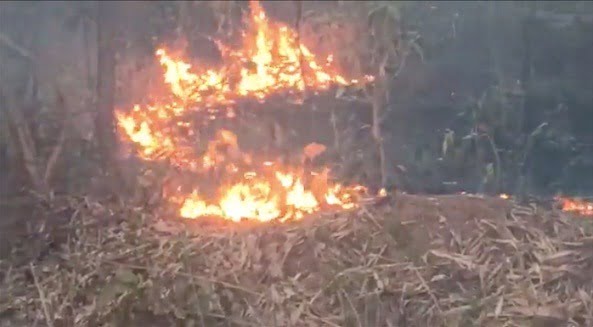 Baripada: A fire broke out in Gandhi Kailash hill near Bhanjanagar town in Odisha’s Ganjam district.

While rising temperature is being suspected to be the reason, some locals have blamed man-made factors behind the wildfire.

The fire has added to the discomfort for the people, who are already facing hardships due to rise in temperature. Small trees in the forest have been reduced to ashes and the smoke as well as soot from the burnt leaves is leading to pollution in the nearby areas.

The worst affected are the asthma patients and students. With schools and colleges located in close vicinity to the forest, the locals said hot wind is carrying soot from the forest to the populated areas as a result of which everything or person in the open is facing difficulties.

On the other hand, small reptiles and wildlife have reportedly died in the blaze, said local sources.

Similar wildfire was reported in vast stretches of Gunjusahi forest under Rashgobindpur range for the last couple of days. More than 20 acres of forest area is under fire.

Locals said the fire started on Tuesday and has been spreading to vast areas of the forest.

Rashgobindpur Range Officer Madhusmita Das said satellite report revealed no fire in that area otherwise staff would have been deputed to douse, stated reports in TNIE.

Another fire has been reported from Budhadangar of Kendumundi village area and Rengaljuri forest on Patnagarh-Padampur road in Odisha’s Balangir district. Forest areas in Turekela and Khaprakhol blocks have also been under the grip of fire.

In Patnagarh, a forest team is trying to control the fire, said sources.

President Zelensky-Starrer Comedy Series Back On Netflix On Public Demand