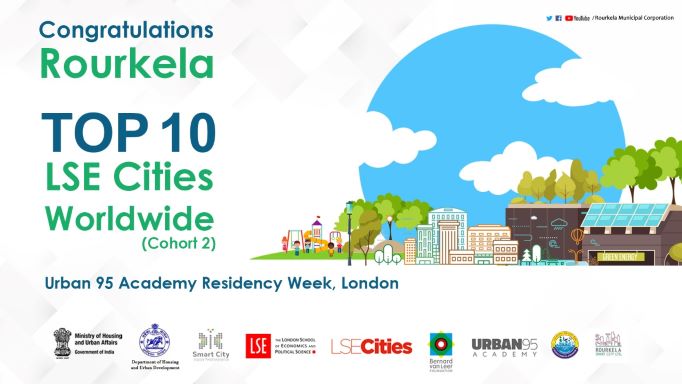 Rourkela: Odisha’s Rourkela city has been selected among 10 prominent cities in the world to attend the coveted Urban95 Academy Residency Week programme at the London School of Economics (Cohort 2). A team from the city will attend the leadership programme at the prestigious institute in London from October 10 to 14.

Rourkela found its place among the top global cities for its proposal on ‘Infant, Toddler and Caregivers’ friendly city for slum and tribal communities. Earlier, it was selected among 10 prominent cities in the country in the ‘Nurturing Neighbourhood Challenge’ programme under the Ministry of Housing and Urban Affairs for implementing a host of child-friendly schemes.

In a tweet, Chief Minister Naveen Patnaik has congratulated the officials and employees of Smart City Rourkela and the Rourkela Municipal Corporation (RMC) on being invited to participate in the programme.

Sundargarh District Collector Dr Parag H Gavali has conveyed his greeting to the entire team. ADM Rourkela, RMC Commissioner and CEO Smart City Dr Subhankar Mohapatra said, “It is a matter of great honour and pride that Rourkela has found place among 10 prominent cities in the world. The success in Urban95 Academy Residency Week programme of the London School of Economics (LSE) will encourage all of us to take our work further.”

Prominent cities from around the world had been invited to participate in the 6-week ‘Urban95 Residency Week’ programme on virtual mode. Rourkela was among the 30 cities which submitted various proposals.

A string of programmes are presently underway to make Rourkela city child-friendly, especially, those aimed at providing protection to the mother and the child. Apart from that, the on-going programmes meant to provide secured and pleasant living condition to residents belonging to tribal and various other communities in Rourkela city had been submitted by Smart City Rourkela for consideration. Those have been endorsed for the Urban95 Academy Residency Week programme.