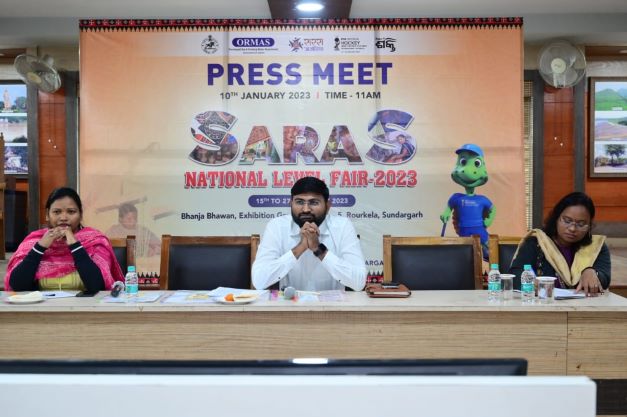 Rourkela: The Sundargarh district would host all-India ‘Saras Mela’ at Bhanja Bhawan Exhibition Ground in Rourkela from January 15 to 27, on the sidelines of FIH Men’s Hockey World Cup 2023.

“The national-level food and cultural fair will provide a platform to Women Self Help Groups (WSHGs) and Producers Groups from Odisha and various other states to showcase and sell their products,” said CDO & EO ZP Sundargarh Manoj Satyawan Mahajan at a presser here on Tuesday.

Giving details about the various events and programmes, Mahajan said, “A total of 250 stalls will be put up during the near-fortnight-long event for which the district administration has made elaborate arrangements. Terracotta products, Dhokra casting metal crafts, handloom products along with various traditional food items prepared by various WSHGs from Sundargarh and other districts of the state will be merchandised at the fair.”

Paper products from UP, various bamboo products from Assam and Tripura, woollens from Manipur, Himachal Pradesh, Uttarakhand and Jammu & Kashmir, jute products from West Bengal, dried flower Potpourri from Manipur, rich handcrafted artefacts from Kerala and Andhra Pradesh will be the other attractions. Well-known artistes from the state and outside will perform at the cultural programmes. Special arrangements are also being made at the Mela venue to facilitate live telecast of the World Cup matches.

The Mela is being jointly by the Sundargarh administration, Panchayati Raj & Drinking Water Department and ORMAS.