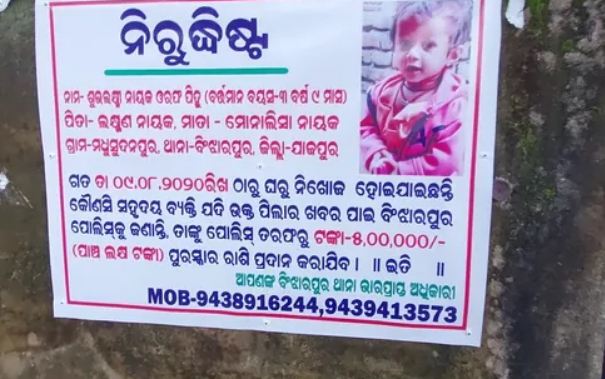 Jajpur: Two years after a minor girl went missing in Odisha’s Jajpur district, police have put up posters announcing Rs 5 lakh reward to anyone who provides relevant information about her, reports said on Wednesday.

Posters, stated to have been put up by Binjharpur police, also shared two mobile numbers for sharing information regarding the girl, who should be three years and nine month old now, they said.

The fresh development in the case came after the girl’s mother staged a sit-in at the office of the Odisha State Commission For Protection Of Child Rights in Bhubaneswar recently alleging inaction on the part of the police and other authorities in tracing her daughter, Pihu.

The woman, Monalisa Nayak, also demanded a CBI probe into the missing case.

The girl has ben missing since August 9, 2020, from Madhusudanpur village under the jurisdiction of Binjharpur police station in Jajpur district. Several posters have been put up in Binjharpur Police Station and other prominent locations.

Pihu’s parents had lodged a missing report with the local police alleging their daughter had been kidnapped.