Rukuna Rath Yatra Is Unique In Many Ways 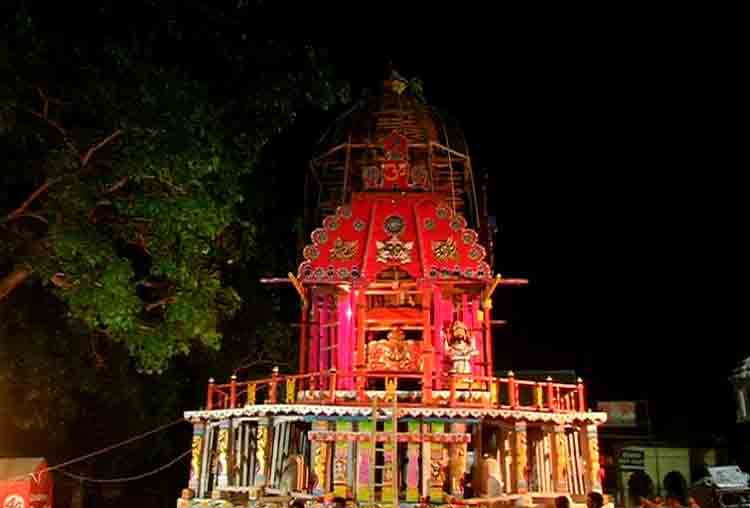 Bhubaneswar: Rukuna Rath Yatra of Lord Lingaraj in the temple city Bhubaneswar is one of the biggest festivals of the city.

This chariot festival is celebrated here on Ashokastami or Basanti Durga Puja, which takes place in the month of Chaitra on Shukla Ashtami (eighth day of the bright fortnight).

On Ashokastami, three deities, Chandrasekhar-the representative of lord Lingaraja, Rukmini and Basudeva are ceremonially brought to ascend a chariot. The chariot is then drawn to Rameswara Temple.

After four days, the three deities start the return journey.

The uniqueness of this festival is that on the day of Bahuda, the chariot is drawn to the temple from the rear, without taking any turn.

There is a saying in Odia about this festival that, “Rukuna Ratha Ana Leuta”, which means the chariot of Rukuna never turns back.

According to tradition, holy water was brought from a well, known as Marichi Kunda. The chariot was washed with holy water from this well.

The first pot of water was used in Rukuna Rath Anukula. The second pot of water was brought for the Queen of Puri and the third was auctioned for Rs 12,000 to Satyabrata Lenka of Patakura area.

According to ancient belief, infertile women can conceive after bathing with this water on the same day.

Rituals like Mangala Alati, Abakasha and some others have already been performed in the temple.

It is scheduled that the chariot will be pulled at around 4 pm.

This year, Rs 20 lakh have been invested for Ashokastami.

Thousands of devotees will participate in the famous Yatra. The  Commissionerate Police has imposed certain traffic restrictions between 1 pm and 8 pm for the smooth conduct of the Yatra. No vehicle will be allowed on the Rath Road from Lingaraj Temple to Mausi Maa Temple via Rath Gada, Muna Medical, Tini Mundia, Gasagorasar and Barik Sahi Squares.