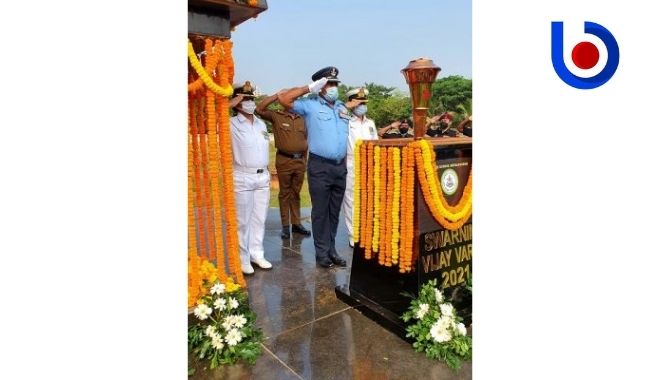 Group Captain S Dominic Rayan, Principal, Sainik School received the ‘Vijay Mashaal’ at the Martyrs’ Memorial of the school. The Vijay Mashaal was taken to the school campus by the principal in an open vehicle.  Cadets and staff members of the school formed a human chain enroute and raised the slogans of ‘Bharat Mata Ki Jai’ and ‘Vande Mataram’ while welcoming and seeing off the Victory Flame.

It was displayed at Vivekananda Hall where a wreath laying ceremony was organised and homage paid to the brave and valiant soldiers of the Armed Forces who laid down their lives while protecting the country and helping neighbouring nation Bangladesh in its freedom. The cadets of Classes IX to XII including the newly admitted girls presented a short cultural programme.

The principal secretary also welcomed the first batch of girl cadets admitted in the school and wished them a bright future. He advised the cadets to focus on their aim and work hard to achieve it.

The event coincided with the joining of the first batch of 10 girl cadets of Class VI the School this year. Commander Pritika Sharma, administrative officer and Commander Usha Sangwan, vice-principal, the two women officers in the school organised resource management.