Narain also alleged that Congress MLA Baba Siddiqui, who is Salman’s close friend, is protecting the actor from Mumbai Police.

Devej Narain, who is the father-in-law of Sushant’s elder sister Shweta Singh Kirti, took to his Twitter handle recently to make these allegations against Salman Khan.

The politician also revealed on Twitter that Salman Khan had tried to blow up his daughter’s car and posted derogatory remarks in the comment section of his tweet.

Strangely, when Sushant Singh Rajput’s ardent followers tried to track Devej Narain’s Twitter account, they found it to be missing from the social media platform.

Here’s what Devej had posted: 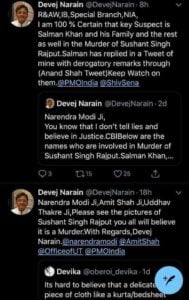 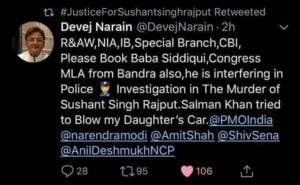 Just when @DevejNarain tweeted in support of Sushant Sir’s case, his account got deleted?!?! What is this happening? #CBIEnquiryForSSR #JusticeForSushantSinghRajput pic.twitter.com/qtXJSw6tKj

Why @DevejNarain account has been removed from Twitter? If it's not murder why Sushant's family members are continuously getting threat? #justiceforSushantforum #ArrestMurdererOfSushant #CBIEnquiryForSSR. Pls @narendramodi @PMOIndia sir help us to get justice. pic.twitter.com/D2shvNU13v

Guys, we want #justiceforSushanthSinghRajput Now @DevejNarain Twitter account is deactivated. There is more to this than meets the eye. Why isn’t the family coming forward? Why isn’t @MumbaiPolice coming forth with the details of his journals. So much is being left unsaid.

This girl @Lizz59544803 received a notification that SSR's official handle followed Alia Bhatt. How is this even possible unless someone is tempering with evidences@RoopaSpeaks @shekharkapur @sardanarohit @republic @abpnewshindi @DevejNarain pic.twitter.com/3m26dt8C9r

If this is true then I must admit that it is quite unsettling as this implies evidence tampering. How long do we wait for transparency in this case? when will CBI intervene?#cbiforsushant #roopaganguly @AmitShah @narendramodi pic.twitter.com/7afp5dhS3I

No More Hugs, Only ‘Elbow Hi’ With Amitabh Bachchan On ‘Kaun Banega Crorepati’!

#MeToo: India, If I Am found Hanging From Ceiling…,…