SC Orders Centre To Send More Forces To Tripura, Where Voting Is On For Civic Polls 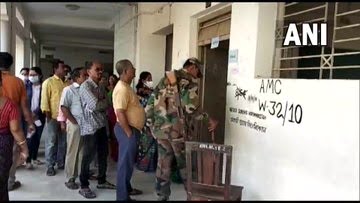 Agartala: Nearly 43.53 per cent polling was recorded till 1 pm in the civic polls in Tripura on Thursday, the State Election Commission said.

Voting for elections to 222 seats in the Agartala Municipal Corporation and other municipal bodies in Tripura is under way.

Amid the Opposition’s claims of violence, the Supreme Court has directed the Centre to deploy additional companies of CAPF (Central Armed Police Forces) “as expeditiously as possible” to ensure free and fair polls.

These personnel will remain deployed till the counting of votes on November 28, the SC said.

The SC also asked the Centre and Tripura government to ensure necessary arrangements for safety of ballots and counting of votes.

The Opposition Trinamool Congress and CPI(M) alleged BJP workers were bullying their candidates and supporters, not allowing them to cast their votes.

As many as 770 polling stations have been established across the state for the civic polls, the SEC said.

66 Students Of This Medical College Test Positive For COVID-19