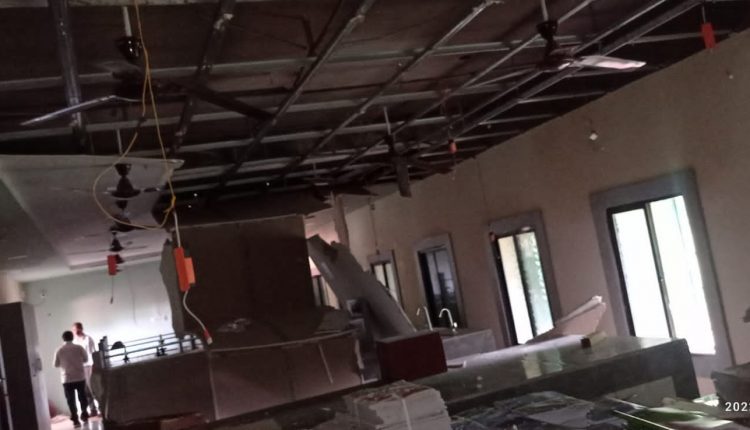 Nuapada: Even as the students of a government school had a narrow escape as the false ceiling of science laboratory collapsed, the authorities attempt to hush up the matter has sparked resentment among the parents in Odisha’s Nuapada district.

According to sources, the false ceiling of the science laboratory of Gopabandhu High School at Khariar Road in the district collapsed on September 2. As the students were not present in the laboratory at the time, none of them was injured. The school was renovated under the 5T initiative of the state government recently.

But the school authorities neither informed the district education department nor the block development officer (BDO) regarding the incident. Instead, they locked up the room and remained silent till the matter was brought to light by the media.

On getting the information, chairperson of Khariar Road NAC Sonia Jain visited the school to take stock of the situation. Following the visit, she told the media persons that the school transformation work has been poorly executed.

Condemning the lack of actions on the part of school authorities, she said they should bring the matte to the notice of the higher authorities as it involves precious lives of the students.

When contacted, project director, DRDA, Madhuchhanda Sahu was evasive in her reactions. “Since all infrastructure development works have been completed under high school transformation programme, such incident should not take place. Even if such incident has happened, we would direct the BDO to conduct an inquiry and file a report,” she said.

She also said the BDO would be instructed to carry out necessary repair of the ceiling and ensure quality of work after checking any loophole in execution of the original construction.

IAF’s Suryakirans Are Coming To Odisha: AN-32 Lands, Hawk Jets To Arrive Shortly