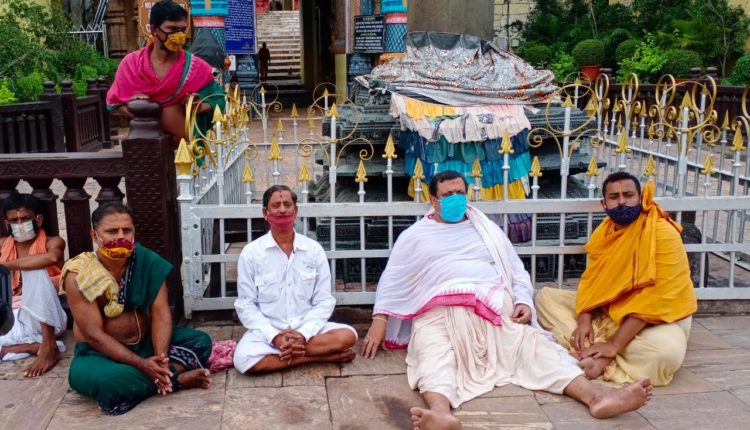 Puri: The Sevayats (servitors) of Jagannath Temple in the town on Tuesday staged a dharna demanding reopening of the temple to the devotees.

Leading the servitors protesting at the Singhadwar (Lions Gate) of the temple, senior servitor Damodar Mahasuar questioned the decision of the state government on keeping the 12th-century shrine closed even as the Central government has permitted the reopening of temples across the country.

He said the Centre has allowed reopening of religious places in a restricted manner under the unlocking process, but the state government continues the closure.

Mahasuara, who is also the former president of Suara Mahasuara Nijog, said the devotees should be allowed inside the temple to offer puja to the deities with strict adherence to the COVID-19 guidelines.

“The government can deploy doctors at each of the four gates and allow 50 devotees to enter the temple at a time,” said Mahasuara.

The State Government closed down the Jagannath temple in March in the wake of the COVID-19 outbreak and is yet to reopen it. Only servitors are allowed inside the temple to perform the rituals.