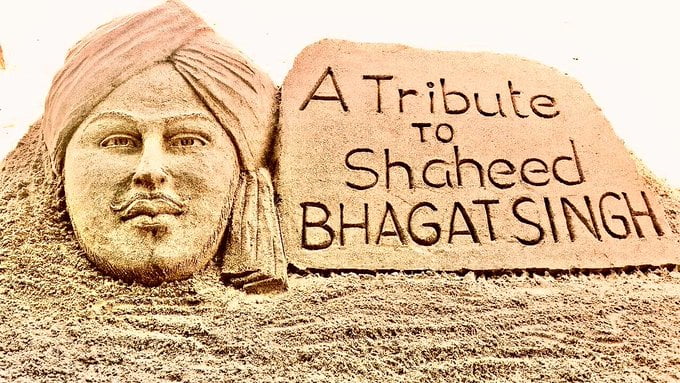 Ironically, the very freedom for which he gave up his life is under threat today. Everyone is invoking him, those who lay down the rules and those who oppose them. On the one hand, we had the Prime Minister eulogising the freedom fighter. On the other, we had Punjab Chief Minister Amarinder Singh leading a sit-in protest at Khatkar Kalan, the ancestral village of the freedom fighter, in Shaheed Bhagat Singh Nagar against the farm bills passed by the Parliament. The choice of the place was obviously symbolic of ‘freedom’.

Social media is full of messages from leaders and citizens alike, some poignant, others inspirational, while some others border on sarcasm.

This is how Shaheed Bhagat Singh is being remembered by the netizens.

This one takes the cake:

If #BhagatSingh was alive today, he would be jailed under the UAPA.

Navika would read out his whatsApp messages to vilify him and Arnab will declare him as the leader of Tukde Tukde Gang.

Wonder Cement or Amity University would sponsor this entire circus too.

Paid tribute to Shaheed-e-Azam Bhagat Singh Ji on his birth anniversary. His life and ideals still inspire all of us, particularly our youth. We all are indebted to this proud son of Punjab for his supreme sacrifice. #BhagatSingh pic.twitter.com/BCwVGgViR4

"They may kill me, but they cannot kill my ideas. they can crush my body, but they will not be able to crush my spirit" ~ Bhagat Singh
Let's remember Shaheed Sardar Bhagat Singh Ji's patriotism & bravery on his birth anniversary 🙏
My tributes and salute💐#BhagatSingh pic.twitter.com/GMZ2k5TVJ7