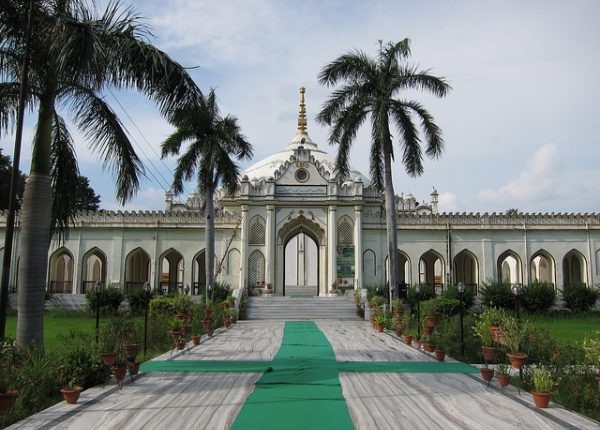 Shia cleric Mohammad Mirza Yasoob Abbas made the announcement after the Archaeological Survey of India (ASI) put up a signboard mentioning the name of Imambara Shahnajaf as the tomb of Ghazi-ud-Din-Haider. While the cleric termed the act as an attempt to “destroy Muslim history and heritage,” the ASI authorities in Lucknow claimed that Shahnajaf Imambara was mentioned as Ghazi-ud-Din Haider’s tomb in the Ancient Monuments Preservation Act, 1920, and they had only put up the signboard with the correct name, IANS reported.

Maulana Yasoob Abbas, who is also the general secretary of the All-India Shia Personal Law Board, was quoted as saying, “There is a continuous attempt to destroy our (Muslim) history and heritage. Heritage sites such as Bara Imambara, Hussainabad Imambara, Imambara Shahnajaf, Picture Gallery, Safed Baradari and other monuments are generating crores of rupees in revenue for the government every year from tourism. ASI has failed to maintain or restore dilapidated structures. Now, they have started changing names of Muslim religious sites.

“Imambara Shahnajaf was built by Nawab Ghaziud-Din-Haider for offering of prayers. When the person who constructed the monument did not name it as a tomb, how can ASI call it a tomb?”

The Shahnajaf Imambara, located at Rana Pratap Marg, was constructed by Nawab Ghazi-ud-Din Haider, the last nawab wazir and the first king of Awadh in 1816-1817.  The Imambara served as his mausoleum and is a replica of Ali’s tomb in Najaf in Iraq. Besides Nawab Ghazi-ud-Din, his three wives, Sarfaraz Mahal, Mubarak Mahal and Mumtaz Mahal, are also buried here.

“In the Ancient Monuments Preservation Act, 1920, the name of Shahnajaf Imambara has been mentioned as Ghazi-ud-Din-Haider’s tomb. As part of heritage site restoration, we have put up a signboard with its correct name,” Superintendent ASI, Lucknow, Aftab Hussain was quoted as saying by IANS.

“We have undertaken several measures to restore heritage sites. Inside the Shahnajaf Imambara, there is the tomb of Ghazi-ud-Din-Haider. Similarly, Bara Imambara (Asafi Imambara) has the tomb of Nawab Asaf-ud-Daula, and Chhota Imambara (Imambara Hussainabad Mubarak) is the tomb of Muhammad Ali Shah. If there is objection to the names of sites, we will take appropriate measure.”

“The names given by ASI remain on papers only. For centuries, heritage sites have been known by their original names. It is a place of worship and ASI wants to designate it as a tomb,” Maulana Yasoob Abbas was quoted as saying by IANS in response to the ASI contention.

“In December, Shia clerics will participate in a session of the All-India Shia Personal Law Board. We plan to launch a campaign to restore the original names of Muslim heritage sites. We will also write to Prime Minister Narendra Modiin this regard.”