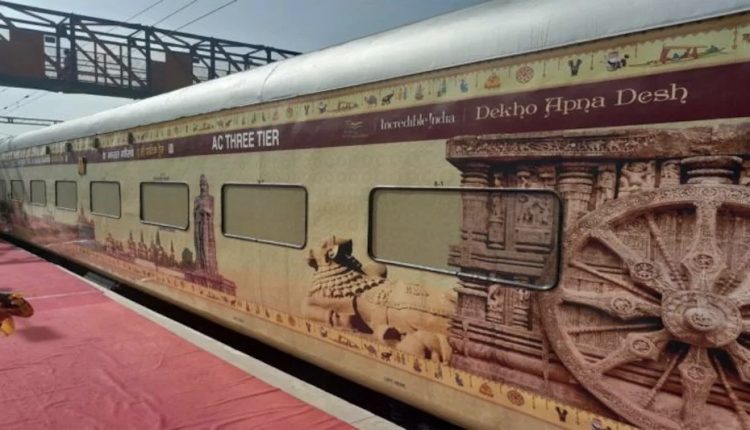 Bhubaneswar: Shri Jagannath Yatra tourist train will set off on its inaugural voyage on Wednesday as part of the ambitious Bharat Gaurav programme of the Railways, covering famous pilgrimage sites of Uttar Pradesh, Bihar, Jharkhand and Odisha.

Fitted with 10 AC three-tier coaches, the tourist train will start from Delhi’s Safdarjung railway station on January 25 and return on February 1. Tourists will have options to board or de-board the train at Ghaziabad, Aligarh, Tundla, Etawah, Kanpur and Lucknow stations. Besides Puri’s Jagannath Temple, the tour includes a visit to the ancient holy city of Varanasi, Gaya and the Baidyanath Dham temple in Jharkhand’s Deoghar, the officials said.

At the first stop at Varanasi,  tourists will visit the Kashi Vishwanath Temple, the corridor connecting it and witness the ‘aarti’ performed on the banks of the Ganga. The next destination is Jasidih in Jharkhand from where the tourists will proceed to visit the Baidyanath Dham Temple. The train will then chug towards Puri, where a two-night stay will be arranged in hotels. In Odisha, tourists will visit the Jagannath Temple, Sun Temple at Konark and temples built during the Kalinga period in Bhubaneswar by buses.

Gaya in Bihar will be the last destination, where the tourists will visit the Vishnupad temple. The train will return to Delhi on the eighth day of its journey after covering around 4,000 km.

According to the Railways, freshly cooked vegetarian meals will be served on board. The train has also been fitted with an infotainment system for the entertainment of the passengers as well as for public announcements. It will also have enhanced security features of CCTV cameras while guards will be deployed in each coach.

The IRCTC Bharat Gaurav Tourist Train launch is in line with the Centre’s initiative ‘Dekho Apna Desh’ to promote domestic tourism. Indian Railways is providing approximately 33 per cent concession for the promotion of rail tourism under the Bharat Gaurav Train scheme. Packages offered are at an economical rate starting at Rs 17,655 per person.

Fact Check: This College In Odisha Asks Girls To Have A Boyfriend Before Valentine’s Day

BMC Issues SOP, COVID Protocol To Be Back During Khandagiri Mela In Odisha Capital