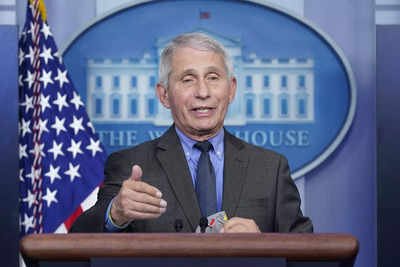 Here are the three suggestions he gave in an exclusive interview with The Indian Express:

Dr Fauci also mentioned that the Indian government had declared victory against the pandemic “too prematurely”.

“One of the things you really need to do that to the extent that you can — is shut down temporarily the country, I think is important. If we want to time out and go back to what I said. There is the immediate, the intermediate, and the long range. I think the most important thing in the immediate is to get oxygen, get supplies, get medication, get PPE, those kinds of things but also, one of the immediate things to do is to essentially call a shutdown of the country,” he was quoted as saying.

Laying emphasis on vaccination, Dr Fauci said, “vaccinate people right now, which you absolutely must, must do — it’s essential — is not going to alleviate the immediate problem of people needing oxygen, needing hospitalisation, needing medical care. That’s not going to fix it now because vaccinating people today, it’s going to be a few weeks before you alleviate the prevention of other people getting sick.

So take care of the people right now. I would think that you’ve got to get some sort of a commission, or an emergency group to make a plan how to get oxygen; how do we get supplies; how do we get medications, and call — maybe with help from WHO — countries.”

And the US, thankfully, I’m very pleased to see, they have now moved to make a major commitment for medications, for oxygen, for PPE, and for ventilators. But we’ve got to get other countries to come in and help India right now because India has been very generous in the past crises in helping other countries. Now is the time other countries to try to alleviate the immediate problem that India has. That’s the first thing.

“The second thing, you can mobilise different groups of government. For example, what is the role of the military? Can the military come in and help? I mean, you can immediately get military help the way we, in the United States, have used our National Guard to help us distribute the vaccinations.”

“I think it should at least be seriously considered. The intermediate — to get hospitals built quickly. I mean really quickly, within a matter of — you know, they put up these field hospitals that they built during war. You should think of this, in some respects, like a war. The enemy is the virus. So you know where the enemy is, so I would make it almost like wartime because it’s an emergency,” Dr Fauci told TIE.

On vaccine supplies, he said, “You’ve got to make contractual arrangements with the various companies that are out there in the world. There are many companies that now have vaccines. I think you have to negotiate with them to try and get a commitment. India is what, 1.4 billion people? You have a lot of vaccines that you need to get, and I would go to multiple different companies and try to get contractual arrangements so that you can get vaccines as quickly as you possibly can.”

“You only have two per cent of your people vaccinated. This is what I heard. I don’t know if that’s accurate but that’s what I’m hearing (2% is the number of those who have got both doses, 11% have got at least one dose). And, if that’s the case, you have a long way to go if you really want to protect the people in India. I would leave no stone unturned in getting as many companies as you possibly can to be able to make a contractual arrangement to get vaccines. And also, India is the largest vaccine-producing country in the world. That’s the thing — you should rev up your own capabilities to make vaccines<” he was quoted as saying.