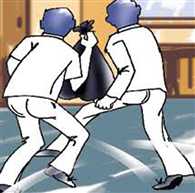 Bhawanipatna: Six masked men looted Rs 13 lakh and 275 gram of gold on gunpoint from the house of a businessman in Kalahandi’s Bhainripali village. The family was engaged in trading cultivated items.

SP (Kalahandi), Batulla Gangadhar told the media that three family members including a son were sleeping at that time. The dacoits broke the wooden door and entered from the rear side of the house at around 1 am. They showed them a gun and hit them with sticks, following which they looted cash and gold ornaments. The family members sustained minor injuries. The SP said a scientific team along with a dog squad had been pressed into service to trace the accused persons.

A week ago, three men had attacked and looted cash Rs 6 lakh from two bikers. The victims (father and son), natives of Borguda village under Junagarh police station, were going home on a bike. While the father survived, his 23 year-old son succumbed to injuries in the scuffle at Bhawanipatna government hospital. In the past ten days, two looting incidents were registered in Kalahandi.