Skeletal Remains Of Another Elephant Found With Missing Tusks In Odisha 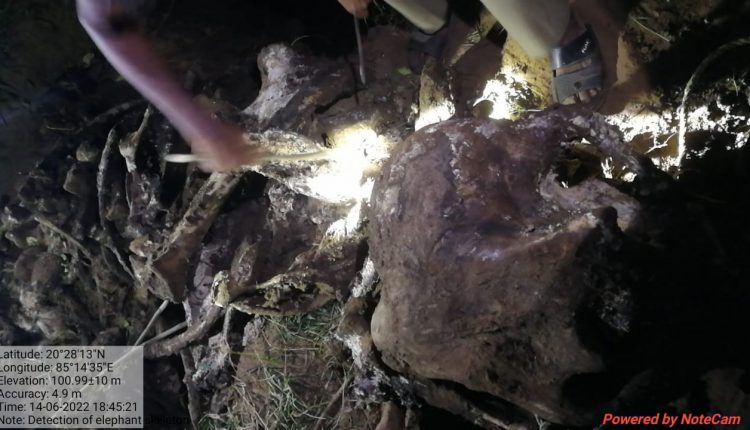 Bhubaneswar: The day when a tusker succumbed to gunshot injuries, skeletal remains of one more elephant were exhumed from Chandragiri reserve forest under Badamba range of Athagarh forest division in Odisha’s Cuttack district.

The remains, which appear to be part of a male elephant, were discovered while the forest officials were investigating the cases of recovery of body parts of two elephants in Badamba range, he said

No tusks were recovered from the site, Yadav said, adding that an investigation has been launched into this case to trace the accused.

Notably, decomposed carcasses of two jumbos were recovered from Athagarh forest division recently. Tuesday saw a tusker succumbing to gunshot injuries after battling with life for nearly three weeks. It was found near a rivulet in Narasinghapur forest range under Athagarh forest division and was shot at five to six places on its body including head, trunk and leg.

According to Wildlife Society of Orissa (WSO) and Animal Welfare Trust Ekamra, Odisha, 133 elephants have been poached or poisoned, 144 electrocuted, 36 mowed down by trains and 6 killed by speeding vehicles on the road since April 2010. They also accused the Forest department of attempting to conceal elephant carcasses or cover up the cause of the death in numerous cases of late.