Puri: The Deba Snana Purnima ritual of the sibling deities is underway at Jagannath Temple here with participation of a minimum number of servitors and strict adherence to social distancing norms.

Instead of crowding the Bada Danda owing to the restrictions to check large congregations, millions of people across the globe are now glued to their television sets to witness the royal bath of the three deities – Lord Jagannath, Lord Balabhadra and Devi Subhadra – who were brought out of the sanctum sanctorum in a Pahandi (procession) by servitors on Friday morning and taken to the Snana Mandap (bathing altar), where 108 pitchers of aromatic water will be poured on them.

Also Read: Jagannath Temple Snana Yatra: Sec 144 To Be Clamped In These Areas In Puri

According to sources, all rituals like Mangal Arpana, Pahandi, Madan Mohan Bije, Mangala Alati, Mailama, Tadapa Lagi and  Adhara Pocha were completed by 5.30 am.

The divine bath of Holy Trinity will begin shortly after servitors fetch a total of 108 pitchers of aromatic water from Suna Kua (well) near Sitala Mandir to Snana Mandap. The holy water is prepared using Chua, Agura, Chandan and purified with Sodasa Upachara.

This day, the full-moon day of the month of ‘Jyestha’, is considered the birthday of Lord Jagannath and a prelude to the nine-day Rath Yatra.

Soon after the ritual, Gajapati Maharaja Dibyasingha Deb will perform ‘Chherapahanra’  at the altar and the deities will then adorn the ‘Hathi Besha’ (elephant attire) between 11 am to 12 pm. Bahuda Pahandi will be performed from 5 pm to 8 pm.

The Information and Public Relation (I & PR) Department is arranged for the live telecast of the religious extravaganza.

Late in the night, the deities will be escorted to Anasar Ghar (an asylum for the sick) and recline in beds supposedly suffering from fever due to the elaborate bath.

During these 15 days, the ailing deities will be offered only fruits and water, mixed with cheese and ‘Dasamula’ (herbal) medicines while Daitapati Sevayats will perform secret rituals to cure them.

After recuperating, they will appear in Nabajoubana Besha (youthful vigour) on Amabasya a day prior to the Rath Yatra. 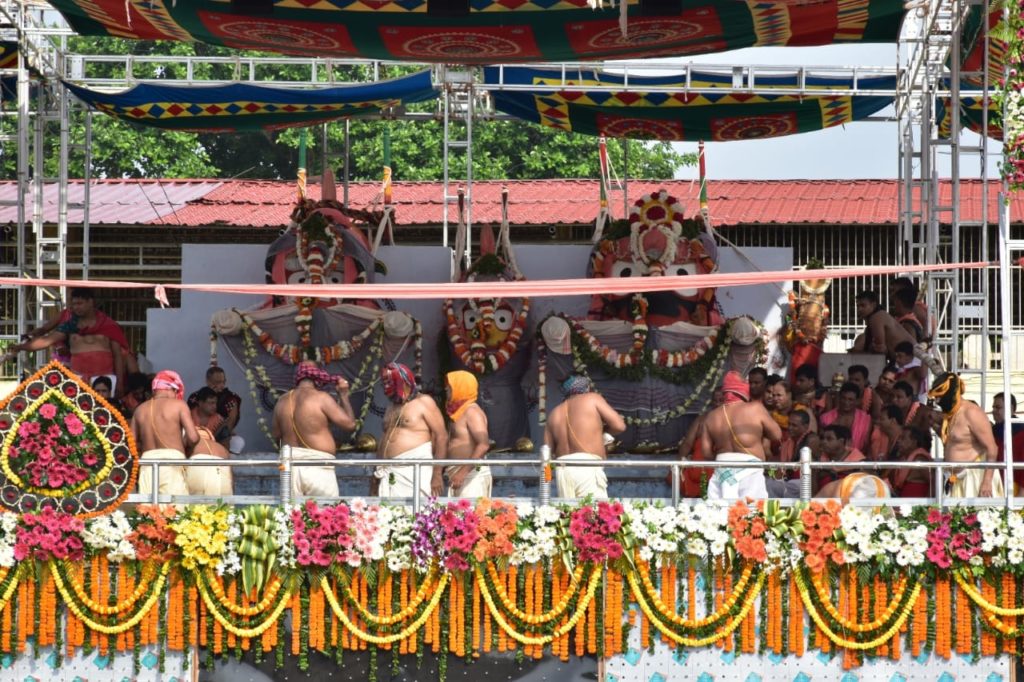 Also Read: Jagannath Temple Snana Jatra: Sec 144 To Be Clamped In These Areas In Puri

How & When To Watch ‘Strawberry Moon’ Eclipse Tonight

How Safe Are Pregnant Women During A Pandemic?

Redevelopment Of Swargadwar In Puri To Be Completed By March…

All But One Khurda’s New COVID-19 Belong To…

Record Spike In COVID-19 Cases In US; WHO Chief Calls For…