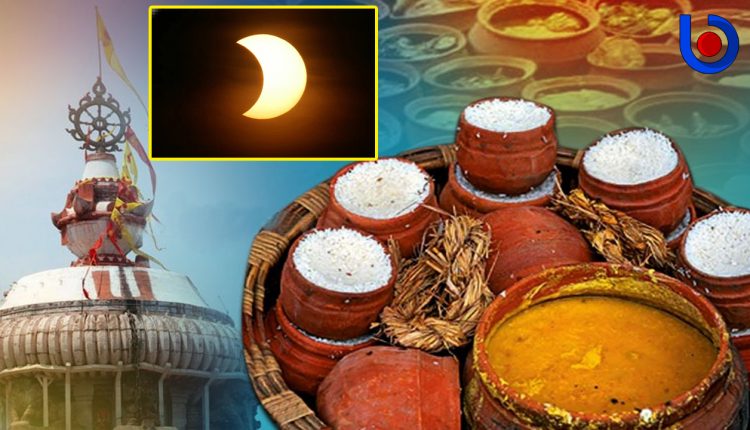 Puri: Even though consumption of cooked food is prohibited in view of partial solar eclipse on Tuesday, a large number of devotees were seen relishing Mahaprasad at Shree Jagannath temple in Odisha’s Puri after paying obeisance to the deities.

Describing Mahaprasad as different from other food, devotees, senior servitors at the 12th century shrine and astrologers emphasised that Mahaprasad should not be considered as an ordinary food.

Though intake of cooked food should be avoided during solar eclipse, the delicacies prepared at the temple and offered as bhog to the sibling deities become Mahaprasad and can be eaten by anyone, they contended.

Noted astrologer Narayan Mohapatra said the sun and the moon represent both the eyes of Lord Jagannath and there is no restriction on having bhog offered to the deities at the shrine during solar eclipse.

Moreover, Mahaprasad is cooked before sunrise and then offered to the deities as bhog, he said, adding that anyone can have the Prasad at Shree Jagannath temple irrespective of age, sex and caste.

Since people from outside Puri are generally unable to visit Shree Jagannath temple during eclipse, they are advised not to take cooked and rich food which is difficult for digestion during the rare natural phenomenon.

Voicing similar views, a senior serviotor of the Shree Jagannath temple said that Mahaprasad can be taken at any time including solar eclipse as it has already been offered to the deities.

“I had Mahaprasad after having a nice darshan inside the temple,” said devotee, adding that many others are also visiting Anand Bazar inside the shrine in order to have Mahaprasad.