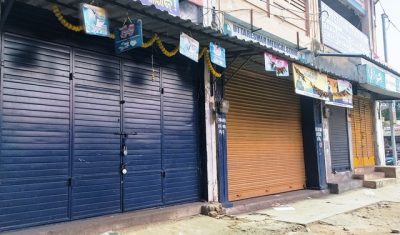 Berhampur: Odisha’s Berhampur city wore deserted a look as people resorted to self-imposed lockdown due to solar eclipse on Tuesday.

With astrologers and pandits advising the people not to go out of the house as it would invite bad fortune, most residents of the city remained confined to indoors during the whole day. The lanes and bylanes, which normally come alive with movement of people and vehicles, were deserted and the vehicles went off the roads. Public transport was also affected as private bus operators stopped plying their vehicles.

Most of the shops except a few medicine shops and tiffin stalls pulled down the shutters throughout the day. The petrol pumps were partially opened while the temples remained closed. Such spontaneous lockdown reminded the lockdown period during COVID pandemic in the city one year back, said the locals.

On the other hand, members of Humanists and Rationalists Organisation (HRO) organised a community feast at Charbak Bhavan as a mark of defiance against traditional belief of abstaining from cooked food during solar eclipse. “We are holding an awareness meeting about the eclipse and organising the feast to dispel the blind-belief among the people about natural phenomenon,” said district president of HRO Tejeswar Rao.

“Earlier, people were victims of superstition due to their ignorance and lack of scientific reasons of the celestial incidents. With the advancement of science, we can understand why solar eclipse occurs. In spite of it, people continue to believe in superstitions. We want to make people aware and not believe in unscientific and unfounded traditions,” said Bhalachandra Sarangi, a member of the organisation.

What Do You Think About Kissing In Indian Weddings? Read This Twitter Debate